For this weeks beer brawl, we changed it up a bit and did a regional example of a style.  The Belgian Tripels originated in Belgian, as the name states, but have in recent years gained a lot of traction in the United States.  For this episode of the Beer Brawl, we have six beers from the North Eastern US and one from Quebec, which we are going to compare to one of the original Trappist Tripels, Chimay.   This should make for interesting Beer Brawl, American interpretation of the Belgian Tripel. 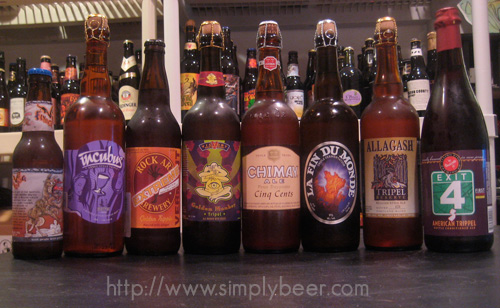 With me on this podcast were Mark Jackson and Corey Greenberg.  The only prerequisite I have for these Beer Brawls is a love of beer.  You don’t need to know anything about the beers we are drinking only a willingness to try them and voice an opinion. 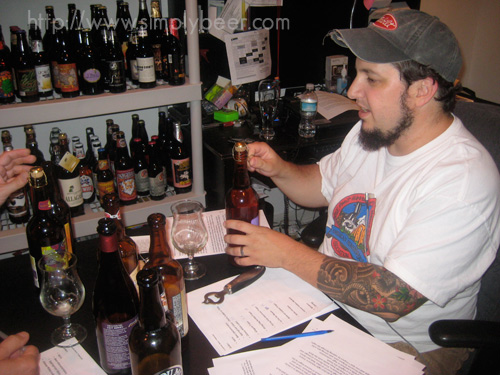 To start the night we sampled the Chimay Tripel, being an authentic Belgian Trappist Trippel, it was a great place to set a baseline for our taste buds.  First in our lineup of North American Belgian Style Tripels was the Allagash Tripel, what a great way to start the brawl!  This was an excellent Tripel.  Next was another solid beer from Flying Dog, the Kerberos Tripel.  It did stray off from what we expected for the style, it was a good beer.  Speaking of straying off the style was the Flying Fish American Trippel.  This beer was an American Imperial IPA Belgian Tripel. It had a monster hop aroma, with the taste of a Belgian Tripel.  Next, was the hero of the night, the Canadian Unibroue La Fin Du Monde.  This was a stellar beer, hands down; we all agreed. Unfortunately it was pretty much down hill from there.  The Rock Art and Slyfox were average at best, but we made a slight recovery from those two with the Victory Golden Monkey to end the podcast on a positive note.