Beer Brawl™ 30 was the brain child of Kevin Malavarca from the Liquor Outlet in Boonton NJ. Since we are right around the corner from the Super Bowl, what better way to prepare then to figure out what is the best session beer. The Session Beer Challenge, each of us brought our two favorite session beers to the table for a winner take all (bragging rights) challenge. 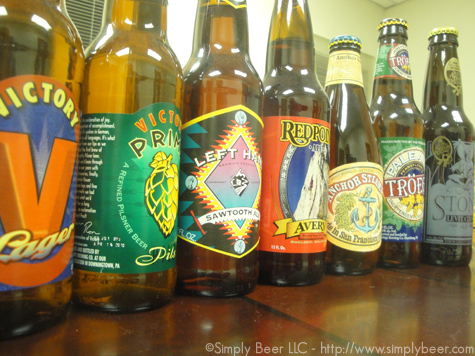 Joining me on this podcast was Kevin Malavarca from the Liquor Outlet in Boonton NJ, John Hoyos from Hunterdon Distribution, and Jim Galligan from the Beer and Whiskey Brootherhood. The only prerequisite I have for the Beer Brawl™ is a love of beer.  You don’t need to know anything about the beers we are drinking only a willingness to try them and voice an opinion.

Download the podcast and listen to all the details about how these Wild Beers stacked up against each other. But if you don’t have time to listen, here are some Tasting notes:

This first beer of the night was a 4.7% abv ESB. The Sawtooth had a nice caramel malt aroma with some decent hops.  A Fairly decently balanced beer we thought, buttery and bready but left us a bit flat on the finish.  We all enjoyed this beer, very representative for the style.

This beer clocks in at 5.2% abv.  The appearance of this beer left something to be desired, looked like mountain dew.  Although, it smelled and tasted like German Hellas lager, good and crisp, slight noble hop influence. This would be a great beer for all those Bud, Miller, Coors drinks you might have over.

One of the most popular of the night, the Prima Pils weighed it at 5.3%abv.  It was significantly more hoppy then a traditional pils, but it was very smooth and crisp with a bitter hop finish. A delicious Pilsner that you must try.

Another favorite of the night, coming in just under the wire at 5.5% was Avery’s big malt bomb of a session beer.  Beer also had a pretty significant hop profile balancing out the malt nicely. While it looked and smelled like a full bodied beer it was fairly light and easy to drink.

This California Common comes in at 4.7% abv.  Unfortunately for Anchor Steam, it was probably the least favorite of the bunch.  Very fruity nose, sweet with a fairly dry finish.  Lacked a lot in flavor compared to the previous beers.  But, by no means was it a bad beer; it was very drinkable.

The consensus best beer of the night.  Great aroma on this 5.4% abv English pale ale.  Well balanced hoppy, malty, biscuit beer.  It had a great finish.  This beers, aroma, flavor, and mouth feel was the complete package out of all the beers in this challenge.

A very big nose, like a bold IPA, but with a very light mouth feel.  Kevin described this beer as “Baby Bastard”.  It was like the baby/light version of Arrogant Bastard.  The one issue we had was the end dropped out on the beer.

I’m working on future Beer Brawls™, we have a High Octane, Dogfish Head, and Porter Beer Brawls™ coming up. We’d also love to hear your suggestions!