This weeks’ Beer Brawl features Scottish Ale.  Scottish ale is a style of beer characterized by a low hop profile, malty backbone, and is a smooth drinking beer.  The Scottish have been brewing beer for over 3000 years and have developed a style of beer which fits this region where hops will not grow and requires them to be imported, but is a huge producer of barely. 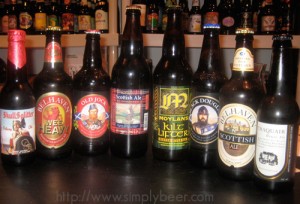 This time I decided to go in the order of the schilling designation, which is by ABV (Alcohol by Volume).  The two 5% abv beers are 80 Schilling (/-) beers and the remaining are 90/- to 160/- beers called Wee Heavy.  First up was the Black Douglas, excellent start to the night, full bodied and flavorful.  The two Belhaven beers were up after the Black Douglas, the 80/-, thin, not much body and then the Wee Heavy which was a step up from the 80/-, but still not memorable.  After a hit and miss, start the Old Jock was right on the money, unique aroma and great flavor, This turned out to be one of Marks favorites.  In my mind, the next beer Traquair House Ale was one of my favorites, fully balanced smooth beer.    For the first American made Scottish Ale, the MacFoochies was an excellent Scottish ale, we really enjoyed this Wee Heavy.  The second American beer was the Moylans Kilt Lifter, a huge disappointment.  I think this was just bad bottle.  We are going to attempt to find another bottle and re-sample.  The final beer and maybe one of the best beers I’ve ever had in recent memory, the Skull Splitter.

Next week, Fruited Beer… against my better judgment.