Our first ever blind Beer Brawl.  We decided to test as many Oktoberfest beers as we could easily get our hands on without going over board.  We ended up with 12 that we wanted to try and decided it would be fun to see what Fest beer we truly liked the best without any influence from the brand name.  Since there were 12 beers we decide to split it up into two batches.  We knew what was in each 6 block trial, but we didn’t know the order they would be served and the results we quite stunning!

With me on this podcast was Kevin Malavarca from the Liquor Outlet in Boonton NJ and Jay Phillips from Samuel Adams.  The only prerequisite I have for the Beer Brawl™ is a love of beer.  You don’t need to know anything about the beers we are drinking only a willingness to try them and voice an opinion. 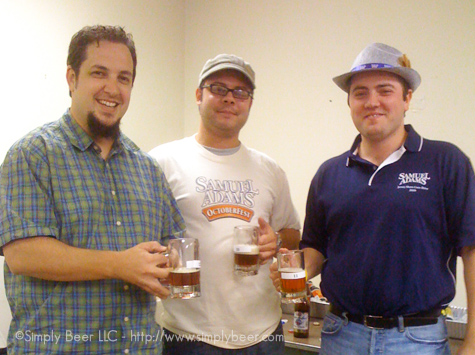 Unlike Oktoberfest part 1, we actually were able to figure out most of the beers.  This second grouping were more on the unique side, including 2 ales making our job a bit easier.  These beers ranged from traditional Oktoberfest Beer to Oktober-Weisse.  Weisse beer is not hard to pick out from a crowd of lagers

Download the podcast and listen to all the details about how these Oktoberfest Beers stacked up against each other. But if you don’t have time to listen, here are how we rated them: