The Spuyten Duyvil is an unassuming bar in Williamsburg Brooklyn on Metropolitan Ave.  The red gate covering the front of the bar has a nice charm to it.  Once you go inside, your greeted by a unique assortment of second hand tables and chairs that really lend to the unique charm of this bar.

Board menu of Beers

What drew me to this bar was the unique beers they had on tap;  With 6  rotating taps and 1 cask pump engine, I couldn’t miss it.  When I was there were draft beers From Hopfenstark, Avery, Founders among others. The cask was a Barleywine, I don’t know too many places that would put a Barleywine on their hand pump.  They also have a unique collection of bottled beer written in chalk behind the board, including a pretty extensive selection of Lambics. 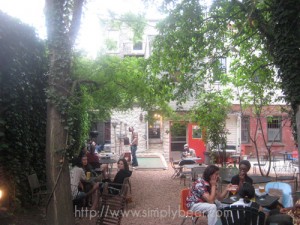 We parked our selves down outside in their large garden area after ordering wine for my wife and beer for the rest of us.  While the bar is a bit on cozy side, the outdoor area is quite large and can fit a large number of people at eclectic assortment of table and chairs.  Since it was such a nice day on our visit, everyone was outside and the bar was empty, thus extremely easy to get another beer.  But, I would imagine on cold and rainy days it gets pretty crowded in there.

Our first round, I had the Avery White Rascal, a light and crisp, lemon and coriander with some nice spicy hopes to finish it.   Allan had a bottle of Trappistes Rochefort 8, which he really enjoyed, and my wife had a delicious Argentinian Malbec. 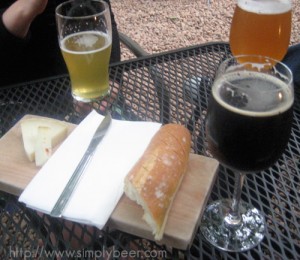 I forgot to mention, they also have cheese and meat, which you can buy, served on a cutting board with fresh bread.  The selection of cheese and meat is much like their beer and wine selection, very good.  There was a choice of five cheeses; we selected a pepper semi hard goat cheese, so good!  With the cheese and bread, Allan and I got another round of beer.  For me, the Hopfenstark Baltic Porter served in a white wine glass(not my choice for glassware with this beer, but acceptable), which had great coffee and chocolate aroma and had a fantastic malty, coffee flavor with a bit of heat from the alcohol on the back end.  While Allan went with the Founders Imperial IPA, great piny citrus aroma with the classic California IPA flavor.

I mentioned they had a great selection of bottled beer as well, I knew what my next beer was going to be when Allan and I went back to the Bar for our third Round, as soon as I saw it – the Mikkeller Beer Geek Brunch Weasel.  While it was a $20 dollar bottle of beer in the bar, it does retail for around $15-$17 dollars, so I didn’t feel slighted at the price.   Allan and I split the bottle; with out a doubt well worth it, the beer is an amazing balance of coffee, malt and alcohol with an aroma of dark fruit and coffee.

Over all the The Spuyten Duyvil is a great treasure in Brooklyn.   One of the best selections of exceptional beers I’ve seen.  I was truly impressed by beer here and wish I had more time to explore the other taps and bottles. This unassuming bar with a small friendly staff is worth the trip from any where in the tri-state area.