This beer brawl really was impromptu, We were over at Corey’s (the sound guy) house for dinner, Mark (my beer brawling cohort) had brought 2 Dogfish IPA’s and I had brought 1.  This quickly became a Brawl of Dogfish Head Imperial IPA’s.  Imperial IPA’s is basically an IPA on crack, more malt, more hops, and more alcohol.  Most Imperial IPA’s are 8%+ ABV with some getting to some very high extremes, like the 120 minute IPA which is over 20% ABV. 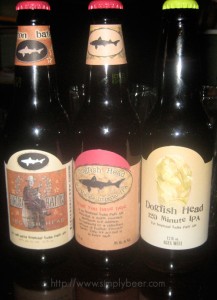 Mark and I started off with the 90 minute, an amazing IIPA with great aroma. At 9% ABV and 90 IBU it was actually the smallest beer.  Next, we moved onto the oak-aged Burton Baton, 10% ABV and 70 IBU, it was completely different IIPA and still an amazing beer.  And finally the monstrous 120 minute IMPERIAL IPA, a luscious and unique IPA.  Download the podcast and listen to all the details about these three brews.

Unlike previous weeks, all these beers were winners!