After Beer Brawl 17, I was looking at the Simply Beer Cellar trying to decide what Beer Brawl 18 would be.  I saw the 21st Amendment Hell or High Watermelon Wheat and I wanted to include it in the next Beer Brawl.  I didn’t want to do wheat beer or fruited beer again, so I decided that it would be unique and interesting beer.  Watermelon in beer and this craft beer in a can, it works for me.  So this Beer Brawl is all about beers that are Unique and Interesting; unique ingredients, packaging, and/or interesting stories behind the beer. 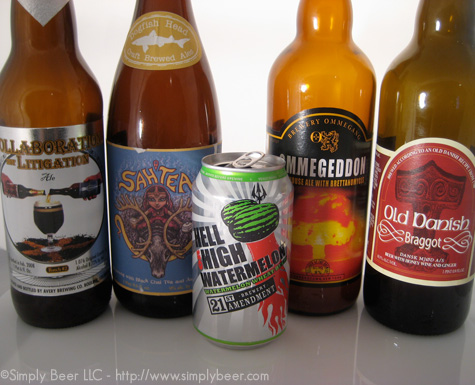 With me on this podcast was Mark Jackson and Teri Gatto from New Jersey News Room.  The only prerequisite I have for these Beer Brawls is a love of beer.  You don’t need to know anything about the beers we are drinking only a willingness to try them and voice an opinion. 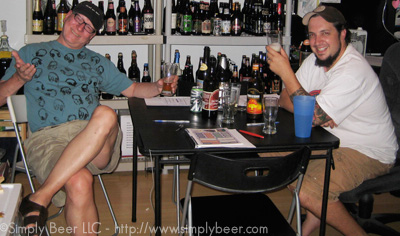 Under the umbrella of Unique and Unusual, the Hell or High Watermelon is the first beer I’ve seen that uses watermelon.  While watermelon isn’t a strong flavor, 21st Amendment uses enough to give the beer a bit of flavor, while still retaining some of the Wheat characteristics.  I did enjoy this beer, it wasn’t as well received by Mark or Teri.

The Dogfish Head Sah’tea is unusual in two ways, no hops and the method used to boil the wort (see video).  Using white-hot river rocks they boil the wort with the rocks not a flame. There’s a ‘ton’ of spices used in this beer instead of hops, like cardamon, cinnamon, cloves, and black tea.  Overall we all loved the flavor of this beer and the craftsmanship that went into it.

Mark Discussing his views on the Ommegedon

A braggot is not a common drink in the US; it is a blend of mead (honey Wine) and beer.  This produces a very fragrant and strong drink.  The Old Danish braggot was an interesting diversion from our typical Beer Brawl path.

The Avery Collaboration not Litigation has a great story behind it, creating a great Belgian Dark Strong Ale by the brewers at Russian River and Avery.

The final Beer, the Ommegang Ommegeddon Funkhouse ale, a farmhouse style ale with Brettanomyces Yeast added to it to give it a funky and interesting flavor.  A definite must try beer.

Next Podcast will be recorded from Andy’s Corner Bar in Bogata NJ, where we’ll be sampling what ever he has on tap.