On a recent trip to Albany NY, I was taken to a local Brew Pub, Brown’s Brewing Company in Troy NY.  This brewpub over looks the “scenic” Hudson River in a part of Troy that looks to be going through a face lift.  Right off the bat there were some things I liked about this Brew Pub, easy parking and some classical warehouse/factory architecture.  Brown’s is located inside a huge brick building.  To greet you after a walk up a flight of stairs to the outside patio, are 5 pots of Willamette Hops.   These look to be for show, but it is still nice to see.  The pub has, patio, bar and upstairs dinning seating, making for a very spacious place.  Unfortunately the outside seating is pretty limited when thunderstorms are threatening, but nonetheless our party of 6 waited about 20+ minutes for patio seating.  While we were waiting it gave me a good opportunity to explore the Pub. 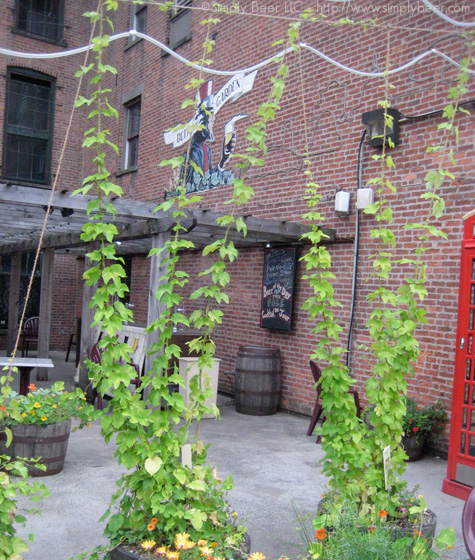 Brown’s seems to brew a fair amount of beer ranging from your typical popular American styles to specialty beer.  As I do with brewpubs I’m visiting for the first time, I ask what the “house” beer is and what are their popular styles.  The bartender told me the Pale Ale was the flagship beer and the Cherry Raspberry Ale and Pale Ale were the two most popular.  Knowing what the favorites are I order a flight of ALL their beer on tap, which was 9 beers.  They were out of their normal Hefe-weizen or it would have been 10. 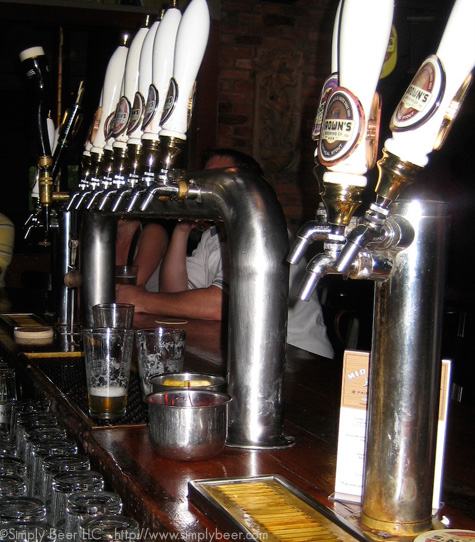 I always find it interesting how flights of beer are organized and the order in which I should drink them.  Tonight was no different.  My suggested drinking order was Brown ale, Pale Ale, Oatmeal Stout, Cherry Raspberry Ale, Porter, Pilsner, ESB, and Golden Rye.  I found it interesting that the Pilsner and ESB were after a Porter… oh well.  I’m not one to follow all the rules so I changed up the order a bit – Pilsner, ESB, Cherry Raspberry Ale, Brown Ale, Oatmeal Stout, Pale Ale, Porter, Golden Rye, and finished off with a sample of the IPA.  (the IPA was not part of the original flight).

Pilsner – A good refreshing beer, nice clear color with a mild spice back end.  Could drink a lot of these, pretty good Pilsner.

ESB – a smooth mild ale, with a touch of hops.  It had a very buttery creamy mouthfeel.

Cherry Raspberry Ale – to me this tasted like the ESB with fruit flavor.  The sweet and tart of the fruit really stick to the sides of your mouth.  Not a bad fruit beer but wasn’t my cup of tea.  (This is my brother’s favorite beer in the Taproom)

Brown Ale – The brown ale was a fairly dark cloudy beer.  it was very nutty and malty with a touch of toffee.  Unfortunately, I found it to have an off flavor of wet paper in the finish.  This was my least favorite beer of the evening.

Oatmeal Stout – this was a very dry oatmeal stout.  The oatmeal was very strong in this beer, with a touch of cocoa and a slightly burnt finish.  I was not expecting that much burnt flavor on the finish, but still a very drinkable beer.

Pale Ale – As the bartender told me, this is Brown’s Flagship beer.  I was not let down by this beer.  Excellent Pale Ale, crisp beer with good hop bitterness, nicely balanced with the touch of initial sweetness.

Porter – Totally Flat.  I mean no carbonation.  I told the waitress and they pulled the porter off the tap.  Too bad, I thought the beer had some good roasted malt flavor with nice bit of burnt malt on the finish.  Could have been a good beer.  My question is, didn’t the person pouring the beer notice the beer was flat?  Why would you server that?

Golden Rye – This was a light color beer.  It was sweet and grainy with a slightly spicy hoppy finish, I thought it was an excellent session beer, good crisp beer.  Even my wife liked it, she likes very few beers.

IPA – Not bad, it had a low hop aroma, atypical for an American IPA.  The flavors were good, but as a hophead I tend to look for more in American IPA’s.

My Favorites of the night were the Pale Ale, Golden Rye and the Pilsner.  I would order these again.  Next time I’m there Hopefully the porter is in order; I’d also like to try the Whiskey Porter, Maple Ale, Hefe-Weizen and Dunkelweizen.  I almost forgot they server food too, there BBQ sauce is really good.  I enjoyed their BBQ wings and Onion Rings.