This Beer Brawl™ comes courtesy of John Hoyos of Hunterdon Brewing.  John selected out 6 Esoteric Italian Beers from his portfolio and brought them for us to sample at Montclair New Jersey’s Amanti Vino.  Having only had Peroni before, I was looking forward to seeing and tasting some unique Italian beers and hopefully bring a couple of new names for listeners of Simply Beer to try out. 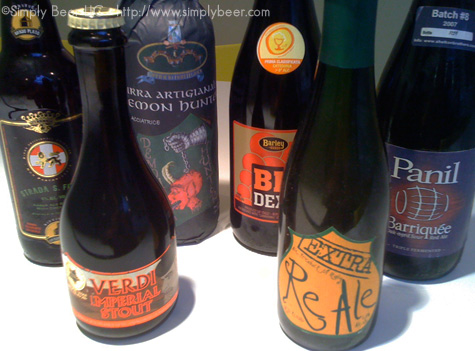 With me on this podcast was Mark Jackson, Corey Greenberg, Travis Glohs from Amanti Vino, and John Hoyas from Hunterdon Brewing .  The only prerequisite I have for the Beer Brawl™ is a love of beer.  You don’t need to know anything about the beers we are drinking only a willingness to try them and voice an opinion.

Before we started the Beer Brawl™, I was looking at the beer and was amazed by the unique ingredients that were being used by some of these breweries.  Now I was excited to try these new beers especially the ones with unique ingredients like chestnuts and chili peppers.

The First beer of the night was a substitution.  We were supposed to be sampling a saison, Del Ducato Nuova Mattina, but it was unavailable. So, we started the night with Grado Plato Strada San Felice.  As soon as I opened up this Chestnut Ale, I was wearing it!  It exploded all over the place.  This was a time I wished we were doing video, it was absolutely hilarious!  This was a malty nutty ale, almost a brown ale.  Good head and lacing.  It also had a really nice hop spice on the backend.  All in all a good start to the evening.

Switching gears to our next beer, Borgo Re Ale Extra, a unique interpretation of a saison.  This beer just played with you sense of smell, super floral hop aroma.  But, the taste was very much like a saison, very dry and the hops did not carry over into the flavor except for a bit of spiciness.  Again a very interesting beer, the second of the night.

Switching gears again to another style of beer for our 3rd Italian Beer of the night, this time a Italian Dark Ale (also was classified as a Belgian Strong Dark Ale).  The Montegioco Demon Hunter was very well received by us, it was a very complex and flavorful beer.  there was a nice balance of malt, hops, fruit, and alcohol to make this one of our favorite beers of the night.  It also had the coolest packaging.

Moving onto an Imperial Stout brewed with hot chili peppers, yes, an imperial stout with chili peppers.  I was kind of skeptical about this beer at first, but the flavors were nicely put together.  The aroma was fairly typical of the style, roasted malts, coffee, and chocolate.  On the palette  you could not miss the hot peppers, there was some serious heat with this  beer.  But, thankfully there was also some serious chocolate and toasted maltiness going on to balance out the flavors.  Surprisingly enough to me, this was a pretty good beer.

Once again, moving onto another style of beer, the Barley BB Dexi was a bit of a hybrid beer.  Literally a Barley – Wine, part beer and part sapa.  The combination of these two together really made for a unique drinking experience.  The 10% abv was expertly hide and the sweet flavors that finished peppery and dry.  The biggest draw back from this beer, the price ~$25 per bottle.

The final beer of the night, and the one I was most looking forward to drinking, was the Panil Barriguée (2007 batch #8).  This our first tasting of a Flanders Red (Sour Ale) during a Beer Brawl™.  This beer is the definition of a Flanders Red, earthy, leathery, sour, and sweet (no sweetners added).  I would love to age this beer for a couple of years.

Please Download the podcast and listen to all the details about these craft brews stacked up against each other.  But if you don’t have time here are how we rated them:

I’m working on the next Beer Brawls™, we have Belgian Quads, Trappist Ales, Pumpkin Beer, and Oktoberfest Beer Brawls™ coming up.  We’d love to hear your suggestions!