This week we took another trip up to Boonton NJ and met up with Kevin and Mike Malavarca from the Liquor Outlet and Wine Cellar.  This is Kevin’s second appearance on our Beer Brawl and this time he selected the theme of our show, Obscure Lagers.  Kevin describes this as, lagers which are new to market, difficult to find, limited production, or just plain obscure.  Regardless of the who, what, where, or why, we are always down to drink some beer and hopefully open up more reads/listeners to different styles of beer! 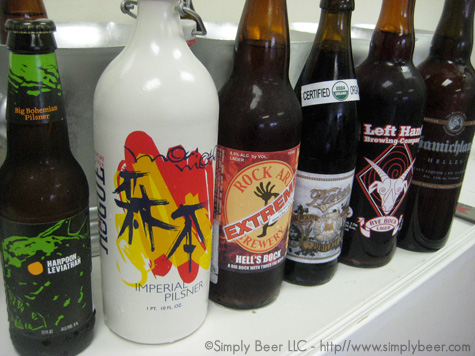 With me on this podcast was Mark Jackson, Corey Greenberg, Kevin Malavarca, and Mike Malavarca.  The only prerequisite I have for the Beer Brawl™ is a love of beer.  You don’t need to know anything about the beers we are drinking only a willingness to try them and voice an opinion.

Kevin said it best before we started recording the podcast, this is really going to be one interesting selection of beer.  I wasn’t that convinced of that before we started recording, but by the end of the night, it was one heck of a roller coaster ride of beer tasting.  We hit some good highs, but also record the lowest score in Simply Beer History! 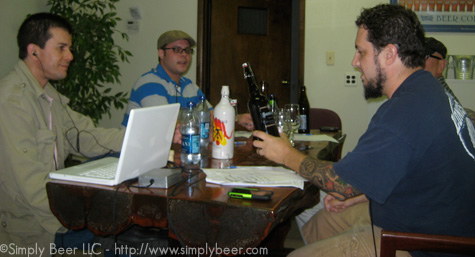 (Left to Right) Corey, Kevin, Peter (Mark is obscured by my gynormous head)

First up for the night was the Harpoon Leviathan Big Bohemian Pils.  Quite frankly I didn’t have high hopes for this beer, I have been continuously let down by Harpoon beers over the years.  But, with a open mind and hopes for something unique from the special line of Harpoon beer we start the Beer Brawl™.  We were all pleasantly surprised by this beer.  At 9% ABV, this was a deliciously big, full bodied, and slightly hoppy pilsner.

Unfortunately, the next beer up could not live up to the standard set by the Harpoon Big Bohemian Pils.  The Rogue Morimoto Imperial pils was a huge let down.  While the bottle did say it was an extremely bitter, which there was a ton of bitterness, it also stated a huge malty backbone which was nonexistent in this beer.  With out the malty backbone, the bitterness just got carried away.

Thankfully the brewers from Vermont got us back on track.  The Rock Art Hell’s Bock was right up our alley!  It was extremely well balanced between the malt and hops for a bock.  There was a bit of tartness in the beer, I’m not sure if that was intended or not, but it really worked well for me.

Continuing on the the good side of beer, was the Left Hand Rye Bock.  Some good healthy debate on the flavors in this one, but we all agreed that it was good, smooth, spicy, and had a nice rye tang.

Just as we were on an upturn, disaster strikes!  The second worst beer I ever had, seriously, I would drink Budlight Lime over this beer if some one offered me the choice today!  We found it pretty much undrinkable. So, we decided to try another bottle…. well, listen to the podcast and you’ll hear what happened next.

After the last beer we had to take a break to get the taste out of of our mouths, but thankfully we ended the night on a high note.  The 14% abv 2007 Samichlaus  Helles was nothing short of a spectacular beer.  Tons of flavors, Raisins, Port, Honey, and Rum.  I’m going to have to buy a couple of bottles to cellar!

Please Download the podcast and listen to all the details about these craft brews stacked up against each other.  But if you don’t have time here are how we rated them:

* If you listen to the podcast, then you’ll understand my rating.

There will probably not be a Beer Brawl™ the week of the 17th, but the week on the 24th I’m trying to line up a very unique Beer Brawl with a Distributor, so stay tuned!