This week we decided to do Pilsners since it had been so hot in the NYC metro area for the last week.  We’re breaking into summer with the heat and want a beer that would be refreshing in that temperature.  Pilsners are generally considered a session beer, low in alcohol, 4-5%, as a result we went overboard with our biggest Brawl yet.  This brawl incorporated 8 Pilsners, 2 Czeck Pilsners, 5 German Pilsners and 1 Rye Pilsners. 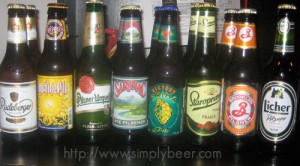 Pilsners are lager beers which tend to be light in color, slightly malty up front that finish with a slightly spicey hop bitterness.  The biggest characteristic is they tend to be clean, crisp, and refreshing.

Joining me this week, as usual, was Mark Jackson, Will Hogan, and Corey Greenberg on the Audio.  The only prerequisite I have for these Beer Brawls is a love of beer.  You don’t need to know anything about the beers we are drinking only a willingness to try them and voice an opinion. 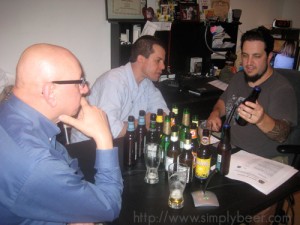 In The Cave (From Left) Mark, Corey, & Peter

We first started with the 2 Czeck Pilsner, Pilsner Urquell and the Staropramen, then proceeded on to the unknown, the Rye Pilsner.  The Rye Pilsner was actually a very good beer to our surprise.  Finally we polished off the German Pilsner, Troegs Pilsner, Brooklyn, Radeberger, Licher, and Victory. We has some very unexpected results, surprising us all.  Be sure to download the Podcast to hear all our comments.

AS with almost every week we find a clear cut winner, this week the Victory Pils was by far the best pilsner of the bunch.