Seems like there are a lot of pumpkin beers out there now.  Is this the new American fall beer, like Oktoberfest is for Germany?  I hope not, this type of vegetable beer has only really been commercially made for the last 25 years or so.  Not a long history but as you’ll see a wide variety of flavors can be found with this type of beer from mildly seasoned to full on doughy pumpkin pie. 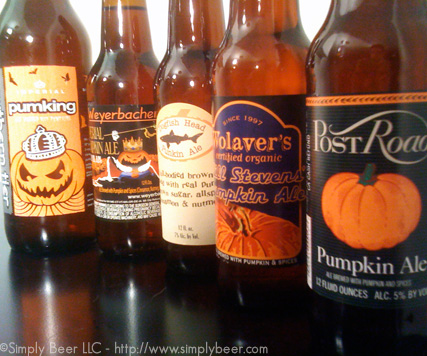 With me on this podcast was Mark Jackson, Corey Greenberg and Will Hogan.  The only prerequisite I have for the Beer Brawl™ is a love of beer.  You don’t need to know anything about the beers we are drinking only a willingness to try them and voice an opinion.

As when we did our fruit beer Beer Brawl™, I was not thrilled with doing this episode.  I’m just not a fan of fruit or vegetable beers on a broad scale.  But, sometimes there are hidden gems or diamonds in the rough.  I always tell people to try new beer, how will you know you don’t like it until you try it?  So I need to practice what I preach, with that said on to pumpkin beer…

First up was the Post Road Pumpkin ale, not the best start we’ve had in a beer Brawl.  Beer lacked some serious flavor, but did have a good amount of spice.  Unfortunately there was nothing for the spice to hold onto to round out the beer.

Going Organic with the next beer, Wolaver’s Will Steven’s Pumpkin Ale.  This beer was brewed with organic pumpkin.  While it was a notch up from the post road, we still were not getting the pumpkin flavor that we were expecting.

Taking a significant step up in the rankings was the Dogfish Head Punkin Ale.  It was a good pleasant tasting beer, finally got a bit of, but not much.  We all felt this one held all the flavors together in the beer with out the spice taking over the beer, a solid beer all around.

Taking a step into the wild side, the final two beers were “imperial” pumpkin ales.  So you’d expect big flavors with big abv’s and that is exactly what we got…

The Weyerbacher Imperial Pumpkin Ale was a crowd pleaser.  Big pumpkin flavors with some big spice and malt.  This is what were were all expecting from a pumpkin beer, but while one of the best of the night, still was not converting me to the pumpkin side of the force.

Finally, I think the beer I was looking forward to the most, the Southern Tier Pumpking; heard so many good things about this beer and how it tasted just like pumpkin pie.  Well, ahh…., it was not my favorite by a long shot.  However Corey and Mark did really like the beer, not so much for myself and Will.  The intense sweet doughy pie filling was not my thing, but Corey who liked this beer called it “cupcakey”.

Please Download the podcast and listen to all the details about how these Pumpkin Beers stacked up against each other. But if you don’t have time to listen, here are how we rated them:

Next week will be Oktoberfest beer part 1, a 2 part series and our first ever blind tasting! I’m working on future Beer Brawls™, we have Belgian Quads, and Trappist Ales Beer Brawls™ coming up. We’d love to hear your suggestions!