In early May, the poll on Simply Beer asked the question, “What is your opinion on fruit in beer?”  The results from this poll was basically split down the middle.  My personal opinion, was that fruit doesn’t belong in beer, but maybe I just haven’t had a good one.  So, this weeks’ Beer Brawl was fruit beer.  A fruit beer is a a basic beer, such as a wheat beer with fruit added. 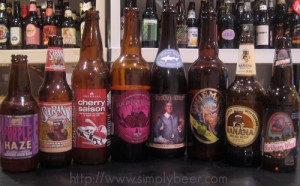 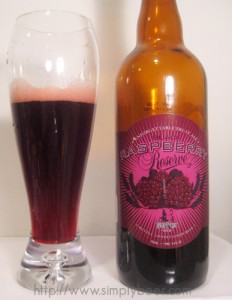 Going in no particular order for these fruited beers, we started off with a very disappointing long Trail blackberry Wheat and quickly moved onto the Saranac Pomegranate Wheat, which at least presented us with a bit more complexity, color, and aroma.  Next was the Abita, a comparable beer to the Saranac, but still nothing had yet wowed us.  That quickly changed after we poured the Southern Tier Cherry Saison, great aroma and flavor. The next beer caught us off guard, Sly Fox Raspberry Wheat; it poured a purple color with a pink head, pretty cool and tasted like raspberry jam.  The Unibroue Ephemere (pronounced YOU-ni-brew eff-eh-mehr) took us to a different style of beer, an apple beer, which was very similar to a dry white wine. After the Unibroue was a beer which name scared me, Banana Bread Ale.  This beer is made with banana, but that was the only thing interesting about it.  The final beer was the Dogfish Head Black & Blue; it was an amazing beer, by far the best of the lot, complex and well worth a purchase.