I’m not entirely sure how this Wychwood Fiddler’s Elbow English Pale Ale ended up in my Beer Cellar, but it has been there for a couple months and you don’t want to let Pale Ales sit to long, they don’t have a great shelf life.  At 5.2% abv, I thought it would bee a good session beer to have today. 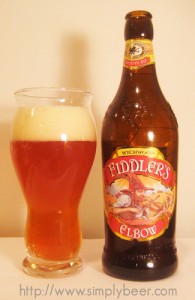 Beer poured a nice thick 1 1/2 inch head with a standard pour into a modified pint glass.

Slightly hazy, golden in color.  Poured initially with a pretty big head which quickly reduced to a thin foamy layer.

The aroma is earthy and buttery, but overall fairly subdued. No really hop presence on the aroma ever so mild fruit (orange) aroma

First impressions of this beer was an orange flavor up front, but not much citrusy like an IPA or APA. The flavor worked it way back to a creamy hoppiness on the back or your tongue. At the end,  a mild bitterness lingers for a bit after the sip.

Very drinkable beer, pleasant flavors and it goes down smooth.  Very creamy and buttery are the dominant impression of the beer.   I could sit back and drink a couple of these, especially at 5%abv.