Last night was Brooklyn Brewery’s Invitational Release Party for their two newest offerings: Sorachi Ace in 750ml corked bottles (formerly a Brewmaster Reserve Beer) and Buzz Bomb Ale, the newest in the line of draught-only “Brewmaster Reserves”. In addition to the beers themselves, we were also treated to delectable cheeses from Bedford Cheese Shop along with delicious chorizo and barbacoa from The Meat Hook. But onto the reason we were there, the beers!

As most of you know, I’m on the wagon this month, but does that stop me from getting a fabulous review for you about Brooklyn’s two finest new beers? Nope, I had help from my friend John Kleinchester over at Beertography.com help me out.

Back in early 2009, my friends and I homebrewed an IPA with six ounces of Sorachi Ace hops in the kettle. Needless to say, the lemony characteristics of the Sorachi dominated the brew and it was pretty unbalanced. So when I saw that Brooklyn Brewery would be producing a brew with Sorachi Ace as the main hop, I was worried that it too would be too much lemon flavor for me. Luckily (and not surprisingly), Brewmaster Garrett Oliver knows exactly what he’s doing. Brooklyn’s Sorachi Ace has a pale yellow, very clear appearance with good head retention. From the nose you get pine, cracked pepper and most of all, lemon zest. Taste is all lemons up front and then the pine comes through on the back end with a slightly dry yet sweet finish. The drinkability here is pretty high as long as you don’t mind the taste of the lemony Sorachi. Definitely my favorite of the two new beers unveiled. 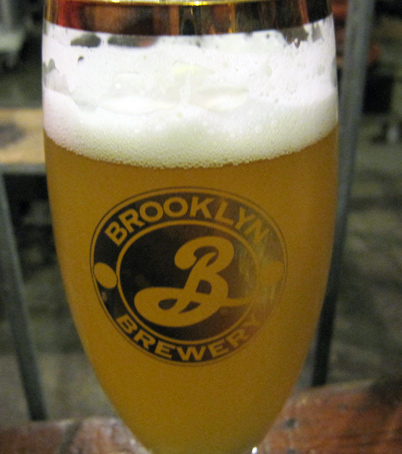 This is known as a Braggot Ale, which beeradvocate.com describes as “made by blending spices and herbs with mead and beer, to produce a strong concoction with uncommon flavors.”. I hadn’t read that definition prior to trying it last night, but Mr. Oliver definitely hit the nail on the head with this one. 25% of the fermentables in this come from honey from the Finger Lakes region in NY. The beer pours a cloudy yellow and laces the glass slightly while retaining minimal head. You can really tell right away that they used Belgian yeast in this one when you smell it. Balancing out the aroma are notes of bananas, esters, a twinge of farmhouse funk and even a tiny bit of grape. The taste of this brew is unlike any I’ve ever had before. Its very sweet but not overpoweringly so. Just as Sorachi’s focus is lemons, Buzz Bomb zeroes in on the honey. It has mead-like qualities while still remaining malty and almost reminds me of beeswax…in a good way. Despite being sweet, it still goes down rather easy, especially for being 8% which is virtually undetectable. I’d say the only deterring factor for the Buzz Bomb is that I can’t really imagine enjoying more than a glass because of the sweetness. But still a very original and interesting beer that I’d recommend everyone try.