Picked up this bottle of Ithaca Beer Company’s Excelsior Old Habit soley based on the label.  I knew nothing about this beer before I bought it at Beers of the World in Rochester.  The label describing it as aged in Oak Barrels.  I have a weakness for barrel aged beers; love the woody characteristics a beer can pick up.

Excelsior Old Habit is our hefty Rye Ale brewed with four different Rye Malts (American, British, British Crystal Rye, and German Chocolate Rye) comprising 40% of the Grist….it takes two mashes to avoid disaster (yes, we learned this the hard way). We age it for no fewer than eight months in Rye Whiskey barrels from the Heaven Hill Distillery (used to make their Rittenhouse Rye, a Pennsylvania style Whiskey). It also gets a healthy dose of American C-hops and is 100% bottle-conditioned.

We’re really proud of this beer, and I think it’s a departure from a lot of the other barrel-aged beers out there, as it’s not very dark and carries a spicy whiskey note that bourbon barrels just don’t have. Add in the viscosity of the rye and the mouthfeel fools you into expecting a sweet finish….nope. Very well-attenuated.

This beer is a deep chestnut color with a big thick amber head.  When I opened the beer, it foamed out all over the place, sign of a well bottle fermented beer.  Check out the video.  Luckily i din’t loose to much of the beer.  The head held up very well, clinging to the side of the glass creating some great lacing.

Right out of the bottle you can smell the oak and whiskey, past that there is a earthy spiced maltiness.  The rye in this beer really worked in harmony with the whiskey giving a real Rye Whiskey aroma.  This beer had an amazing aroma that warms you. 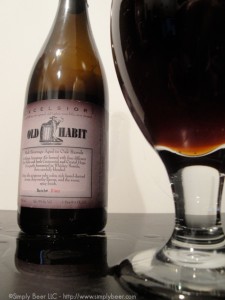 A very tasty beer, the whiskey is a compliment to the flavor of the beer; not the dominant flavor as I’ve experienced in many other beers.  This beer almost borders on a stout with it’s flavors, but is a bit lighter in color. The whiskey, rye, oak, and maltiness all come together very cohesively.

A very heady beer, the 9% abv on this beer went straight to my head.  But it is also a very delicious beer, great balance of strong, rich flavors makes this a very enjoyable beer and one I wish I had another to keep around for another year.