I was surprised to see this at my local Stew Leonard’s Liquor store.  We’ve had the main line (6-packs) of Ithaca beers for awhile in NJ, but this is the first time I’m seeing the Excelsior series.  Ever since I had the Old Habit, I’ve been looking to try more from this series.  The Ithaca White Gold is a “Rustic” Pale Wheat ale that was additionally fermented with Brettanomyces, now this makes me happy!  I love the funk and tartness that comes with this strain of yeast, but lets hope I’m not putting unobtainable expectations on this beer. 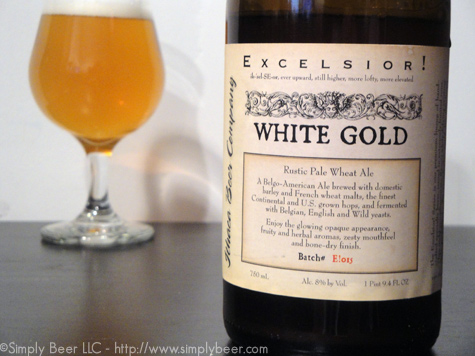 This is how Ithaca describes this beer:

A Belgo-American ale brewed with domestic barley and French wheat malts, the finest continental and US grown hops, and fermented with Belgian, English and Wild yeasts.  Enjoy the glowing opaque appearance, fruity and herbal aromas, zesty mouthfeel and bone-dry finish 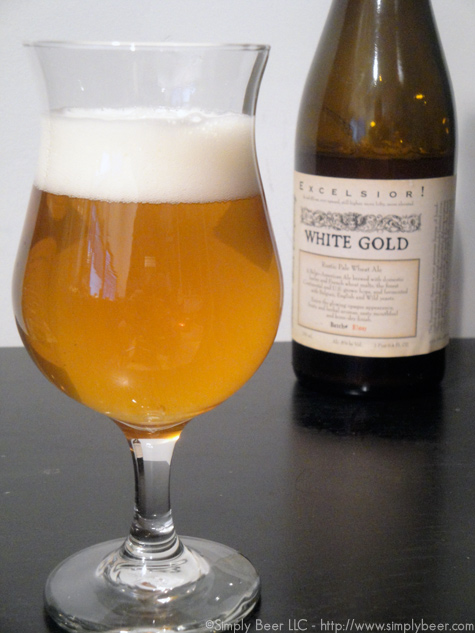 The first glass poured a fairly clear straw orange color, but there is a fair amount of yeast at the bottom of the bottle indicating bottle conditioning.  As you pour this beer, the yeast will get stirred up and the beer will become cloudier.  The little white head didn’t stick around very long before be swallowed back up by the beer.

Now this is what I was expecting from this beer.  The aroma is very acrid, verging on vinegary, but that actually disappeared as your nose acclimated to the aroma; revealing an old leather earthy old orange aroma. I like that this aroma is continues to change as I smelt it over a couple of minutes.  I also picked up subtle hints of candi sugar and then a big wallop that barnyard with lemon. 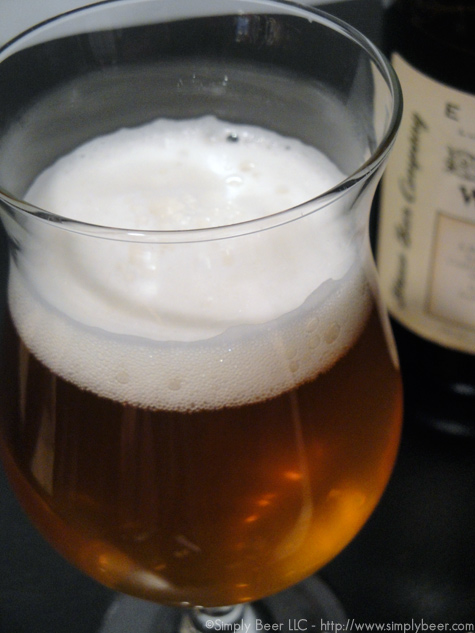 A Very, very interesting beer.  Super dry but has a fairly creamy feel to it.  While the Brett funk plays a huge role in this beer with a bite of tartness and sour orange, the wheat and pale ale aspects of the beer are not totally consumed by the wild yeast addition.  AS the label describes it is a very “zesty” beer, which is a great adjective to described this wonderfully tasty beer.  I also enjoyed the bitterness from the hops at the end as well as their spicy flavor profile married up nicely with the overall zing of the beer.  As I poured my second glass I got a nice tart tropical fruit salad flavor…  what a delicious complex beer.

This is a deliciously complex beer.  I find when Brettanomyces is used to its potential, it can create such a wonderfully complex and evolving beer.  If you haven’t had this go and try it.  Well worth the $9 price point!