It’s not very often in a beer blogger’s world that you come across a group of beers like this to sample.  For this podcast I was lucky enough to get several of Allagash’s Coolship beers and Russian River Beatification.  All of these beers have one thing in common, they all are products of nature, spontaneous fermentation.  What does that mean?  Well, most beers are fermented with cultured yeast strains, these beers where exposed to their environment and left to the divine power of what ever little bugs were around. 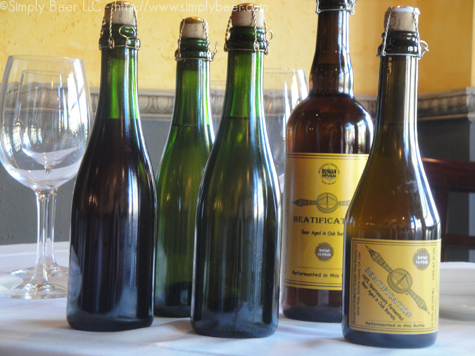 Joining me on this podcast was Mike Carrino, owner of Restaurant Passionne, Eric Ottaway, General Manager Brooklyn Brewery, Kevin Malavarca from the Liquor Outlet in Boonton NJ, and John Hoyos from Hunterdon Distribution. The only prerequisite I have for the podcast is a love of beer.  You don’t need to know anything about the beers we are drinking only a willingness to try them and voice an opinion.

Before I go on I’d like to give a Special thanks to Rob Tod and Jason Perkins of Allagash Brewing Company for the beer and the time they spent talking to me about these beers and the process of brewing these craft beers.  Vinnie Cilurzo from Russian River for his time speaking with me about their brewing and fermentation process. And finally, Mike Carrino for hosting us at Restaurant Passionne.

As usual we have a podcast ready for download:

Download the podcast and listen to all the details about how these Amazing Beers stacked up and the process with which they were brewed.

The first beer of the night was Russian Rivers Beatification, batch 3.  With both batch 2 and 3, these beers were spontaneously fermented in the barrels.  The barrels provided the bugs for these beers and was a blend of two spontaneous beers from June 2007 and Feb 2008.  Both Eric and Mike pointed out this is a great beer for shellfish or briny fish.  It had a strong lemon, grassy nose that carried over nicely into the flavor.  With the lemon in the flavor there was also a strong white grapefruit flavor on a very tart finish, but wouldn’t consider this sour.  We also detected a some interesting spice notes of Thai-Basil or white pepper. Listen to the Podcast

Next was Russian River Beatification, batch 2.  Like batch 3, it was spontaneously fermented in old oak barrels and was also a blend of two beers.  For this version it was a blend from July 2006 and Jan 2007.  It really showed how this beer will age over a year.  It was a lot more muted with its flavors compared to its younger sister.  We also noted the beer didn’t linger as much on the palette nor was it as tart.  Batch 2 was also a bit more lemony, Mike compared it to Limequat and thought it would work well with a spice Thai dish with coconut. Listen to the Podcast

The Third beer of the night was the Allagash Coolship Resurgam.  This is a Blend of 40% 2yr, 40% 18m, and 20% 6 month spontaneous beers.  This beer had a very nice, albeit unusual, tropical/passion fruit’ish nose.  The mouth feel was very smooth, mostly because of the low carbonation.  A very nice beer, not very sour, but had some decent tartness and finished pretty dry. Listen to the Podcast

The next to last beer of the night was Allagash’s Coolship Cerise, a blend of 90% 2yr spontaneous with 10% 6 month  spontaneous which sat on local Maine Montmorency tart Cherries for 3 months.  The most noticeable character of this beer was the lack of color, aptly nicknamed by Jason Perkins as the “Albino Kriek”.  While it didn’t look like much of typical Kreik, it smelled like spicy cherry pie.  While funky, sweet, and tart, the finish was a a bit short lived.

The Final beer of the night was the Allagash Coolship Red. Probably my favorite of the night; I love raspberries.  It was considerably more tart then the other 2 coolship beers even though it was the same blend as the Cerise, but sat on fresh raspberries for 3 months. It smelled of raspberries and funk.  The flavor was tart, almost sour, considerably bitter like biting into a raspberry and finished dry.

One other things we noted and Eric pointed out, while the Coolship beers we wonderful to try, you could tell they were evolutionarily young.  Meaning the process and utilization of the wild yeasts was still being put together.  Don’t get me wrong, If you get a chance to try these don’t pass it up.  But, the up side is Allagash has something special here.  With the talents of Jason Perkins, Alagash’s brewmaster and Rob Tod’s ability to push his company and portfolio of beer forward; I can only imagine how spectacular this series of beer will be in the future.  I salute them for doing something different, doing it well, and putting these beer out there for us to sample.