I’m past day 10, still on the wagon.  On May 1st I went dry. (Here is why)  The hardest part has been working in my basement literally surrounded by beer.  Surprisingly the temptation has not been as bad as I thought either.  AS I think about it, that is good on several fronts.

I’m also amazed by the amount of support I have received by doing this, it could have gone a lot of different ways.  But the number of comments on my original post was proof that people understand why I’m doing this. 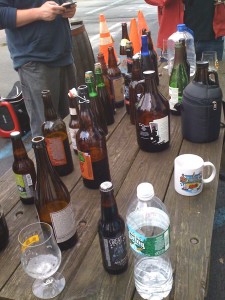 The worst day had to be last Saturday; I went up to Captain Lawrence Brewery for the Smoke From the Oak release.  As with all the releases, I got up early and met a friend up there.  We hung around out side at the picnic table while delicious craft beer after beer was put on the table for people to share.  UGH! The torture, but I made it, with out breaking and got my bottles of Smoke from the Oak!

I’m now 1/3 the way through my short journey.  I think the next 10 days will be the easiest and the last 10 will probably be the hardest as I can see the light at the end of the tunnel.