A couple weeks ago I received an email from a PR Firm asking if I wanted to try out a Draught keg of Newcastle Brown Ale.  To be honest at first I was a little leery about it, mostly because Newcastle is owned by Heineken and is really not considered craft beer.  Then I thought, why shouldn’t I?  It is newish technology and Newcastle used to be my go to beer.  Newcastle and Brooklyn used to be my beers of choice back in the early to mid 90’s after I graduated from Rolling Rock, Light Ice, and other tasteless fizzy yellow beers.  So I say again, why not, lets give this Draughtkeg a try? 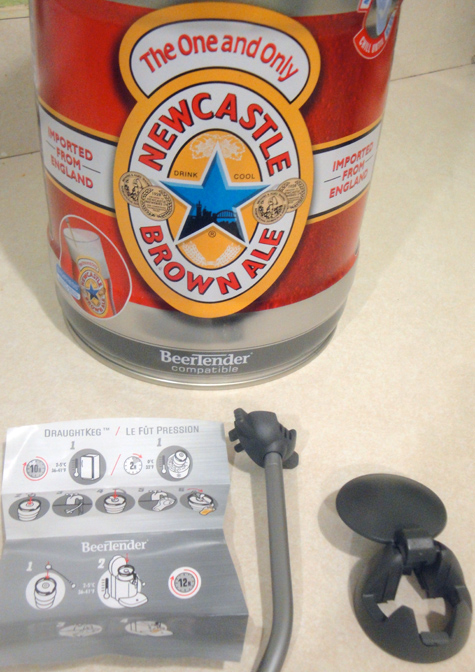 For those of you who know me as a homebrewer, I’m very big on cleanliness of my equipment, including, rather especially my tap lines.  As my beer journey takes me to new bars and venues and you start to taste the same beers at different locations, you can really taste which bars regularly clean their taps and tap lines.   Unfortunately most the places I’ve had Newcastle tend to be places where Newcastle is the best beer on draft and not necessarily an establishment where daily tap clean is even an after thought.  It is amazing how different a beer can taste when there isn’t any foul sludge a beer needs to run through before your glass.  After some trials and tribulations, I found the best asset of this mini-keg.  It is able to deliver a clean beer.  The tap and spout are new and clean, so there is one less thing to spoil your beer. 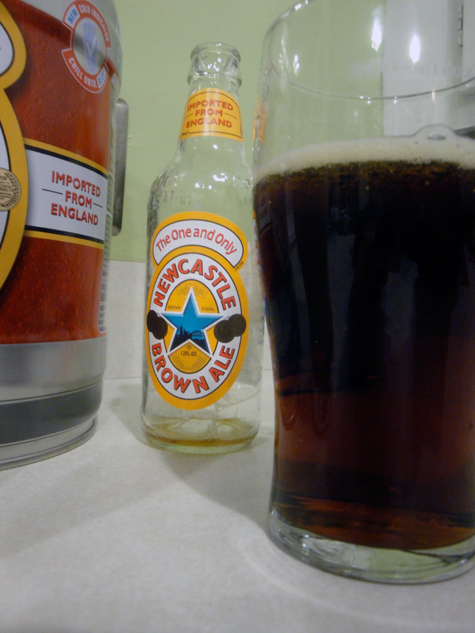 Newcastle Draughtkeg Pour from the Bottle

However, getting to a place of a nice clean pour did test my patience.  I initially wanted to compare the Draught Newcastle to its Clear Bottle brother, that didn’t work out as planned.  My first seven glass from the Draughtkeg were 90% foam.  I have been pouring draft beer for the better part of 20 years.  The way to pour a draft beer is to quickly fully open then tap from the bottom of the handle.  This method helps reduce the foam being dispensed.  I kept doing this with the Draughtkeg with horrible results. Finally it dawned on me to do the opposite, so I opened the lever very slowly and what do you know, I poured a beautiful looking beer.  It had a nice 3/4″ head.  It tasted very nice, much creamier and smooth then its bottled brother.  I must admit, I really was enjoying the beer from the Draughtkeg once I got a feeling for how to dispense it.  Repeatedly, beer after beer came out nice a clean, great head retention, and tasty. 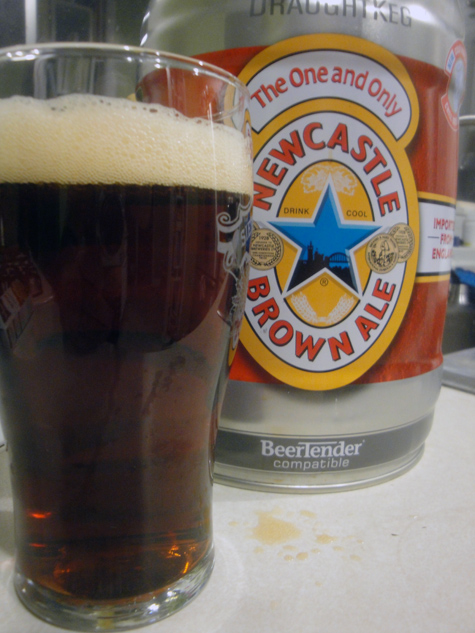 Nice Pour from the Newcastle Draughtkeg

Here are my top five Likes of the Draughtkeg:
5. A clean draft line, which is important to me.
4. The unit is very easy to assemble.
3. Technology of a self-contained draft system is wicked cool making it travel easily.
2. Significant improvement on the look of the beer, great head retention
1. Draft beer just tastes better to me!

Here are my top five Dislikes of the Draughtkeg:
5. It takes up a lot of space in my fridge.
4. Spout drips after the pour, leaving beer on fridge shelf or counter top
3. The cold activation indicator, is that really necessary?
2. Frustration of the first several glasses of foam.  A simple instruction in the setup instructions to open and pour slowly would have saved this beer geek much frustration.
1. Why aren’t we seeing more of these around?  I think this is a great package for beer, especially for beer on the go especially for Parties and Tailgating. 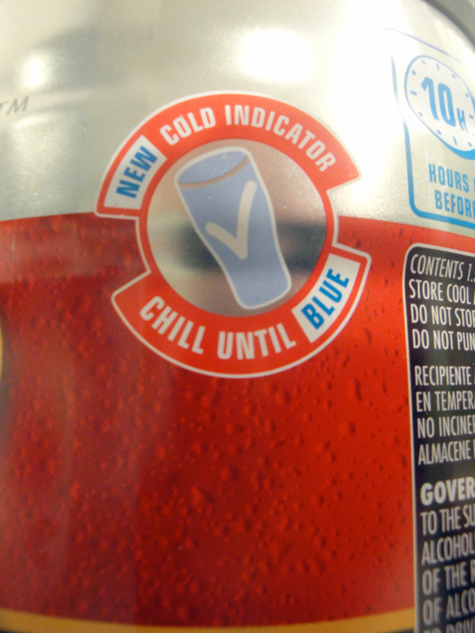 Cold Activator Indicator on the Keg

Thanks to Jack at Formula for sending me this Draughtkeg. Had he not, I don’t know if I would have every bought one.  Like I said in my last dislike, this is a great package for beer.  Apparently beer can last for up to 30 days after you have tapped it, so if you have a favorite beer, you can keep it around in your fridge for a while.