For Simply Beer’s first Beer Brawl, we sampled Ballast Point’s Big Eye IPA, which was a delicious beer.  Their Yellowtail Pale Ale is not actually a Pale Ale, but is a Kolsch Ale.  Kolsch is basically an American lawnmower beer; a ale version of American Lagers. It is a light, clean, and well-attenuated. 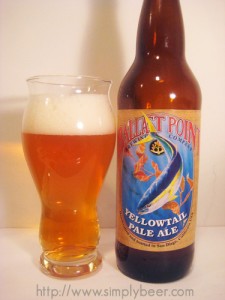 A golden clear beer with a frothy white head. Head created some lacing.

Initially this beer smelled sweet and grassy, bit earthy and musty as well as bit malty.

Interesting flavors, a biscuit maltiness dominates the flavors, but it also had a bit of a white wine grape flavor.  Almost no hop presence, but had a slightly sour finish.  It had a fairly empty mouth feel.

I was not a huge fan of this beer it had some off aromas and flavors, not a very complex beer.  A dissappointment especially after their Big Eye IPA.

Try with a simply light salad, but stay away from a balsamic dressing with this beer.