Why Are Homebrewer So Secretive of Their Recipes? 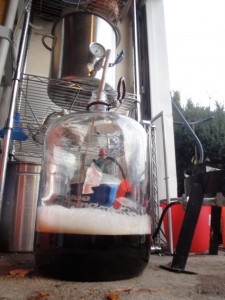 I posted on twitter a link to my latest homebrew recipe, a Schwarzbier (a German Black Lager),  Soon after the post I received two tweets.  One was a 140 character rant on many homebrewers not sharing recipes and the other was a thank you for posting the recipe.  This got me thinking about why homebrewers can be very secretive about their recipes; I thought, rather think, the beer community is about sharing and helping fellow brewers.  I may be naive in my thinking, but read the rest of this and let me know what you think.

@SimplyBeer Unless it is someone else’s and published in a book, I find it lame when homebrewers don’t share recipes.</rant>

While I don’t publish all my recipes for 2 reasons which I’ll get to in a second, I completely agree with Jamey.  I really don’t see why homebrewers are so secretive about their recipes.  The biggest reason, homebrewing is a hack job.  Seriously, we are all (most of us) working on homemade equipment, we don’t have the fancy equipment professional brewers have as far a digital temperature control, closed systems, water treatment, glycol among many other things.  Now I know there are some pretty technically advanced homebrewing systems out there that cover most of what I just described for what most homebrewers don’t have.

Now lets take out the technical advantages, you are left with nature, chemistry, and biology.  Nature is a fickle beast.  You have differences in water.  My water here in Montclair NJ is awesome for making beer, but your softer water or harder water some where else will produce a different result.  In hops, the Alpha Acids are always changing slightly.  If my recipe had Pearle hops at 9.5% and your Pearle hops are 9% or 10% you will have to account for that.  There will always be differences in measuring, such as the amount of strike water for the mash, slight temp differences in the mash temp, the mash out temp, or other temps.  I can be exacting a possible with my notes, but if my thermometer is off by a degree or two, everything will be off and if you follow my recipe exactly with a properly calibrated thermometer you’ll still be off.  I can go on and on about everywhere in a homebrew system where things can go astray slightly(efficiency, attenuation, etc), but one of the biggest will be the fermentation.  With out constant temp adjustment with a glycol jacket, you’ll never get an exact fermentation temperature.  Not only that the slight variations and “mutations” of a yeast colony can lead to variations in beer.

Like I said above, while I don’t have a problem sharing my recipes, there have been times where I haven’t for two different reasons.  The first is the time to put up the post on Simply Beer.  I get very busy and sometimes don’t get a chance to post recipes, especially since I love to include the photos.  I probably have about 10 recipes that I haven’t posted simply because of the time.  Secondly there has been several I haven’t posted because I have a commitment with a brewery to actually produce the beer.  (sorry I’m not going to get into more details here.) I know several homebrewers who are working towards their own brewery/brewpub, so I can understand why they don’t publish their recipes, although I’m sure they have some they aren’t going to use and could share with the world.

@SimplyBeer Thanks for sharing. Schwarzbier is on my short list of upcoming brews. Not a whole lot of homebrew recipes for them out there.

I frankly find it an honor when a fellow homebrewer finds my recipe worthy of brewing.  My peanut butter porter almost has a cult following now of both beer bloggers and homebrewers, which is very cool and flattering.  Like Brian, there was not a lot out there on the Schwarzbiers, but I found a recipe on Northern Brewer and based my recipe on that with some slight changes in the grain bill and the mash and fermentation temps.  I usually like to create my recipes from scratch, but with styles I’m unfamiliar with I like to find other recipes to use.  Another reason why I post recipes, to give other people access or information to recipes.  it is also a way for me to give back, or pay it forward if you will, for all those people who have helped me along the way.

What are your thoughts, as a homebrewer, do you share your recipes?  Do you appreciate it when other homebrewers share theirs?