I’m lucky enough to be on Ommegang’s beer list and occasionally they send me beer to check out.  The last box I received from them had two bottles from their “Exclusive Beers” line.  As far as I can tell these are pilot/test batches that they are looking for feed back on.  The first one was the Zwaar Blonde that my family shared with thanksgiving dinner and the other was this Porter (sorta).  this beer was brewed about a year ago and bottled about 10 months ago.  After drinking the Zwaar Blonde last week, I’m really excited to try this porter.  As some of you know, Porter is one of my favorite styles. 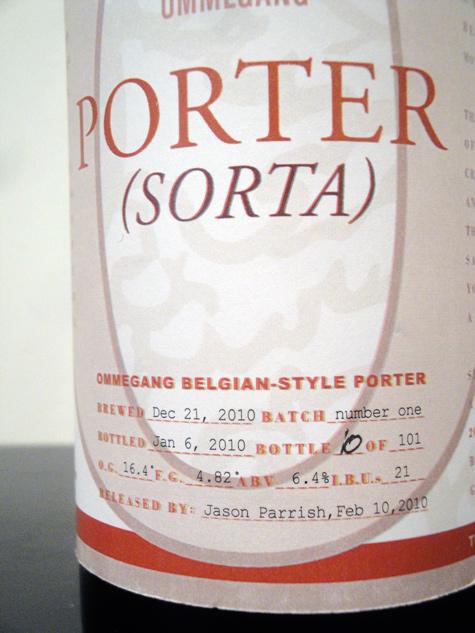 Ommegang describes this beer a British Belgian hybrid Porter, basically a malty British porter fermented with Ommegang’s house yeast.  The description on the bottle says to expect a malty, moderately carbonated, and estery beer.  The last part is where this beer would diverge from an typical English porter, they generally have almost no fruity esters which make them taste a bit drier then they really are.  The second thing I noticed (sorry if I geek out here) on the label before I started was the Original gravity and Final Gravity of the Beer. It’s Original Gravity 16.4 plato and Final Gravity of 4.82 seems as though it is a bit under attenuated (more sugar left from fermentation).  But aside from that I’m excited to see what a Belgian-Style Porter tastes like! 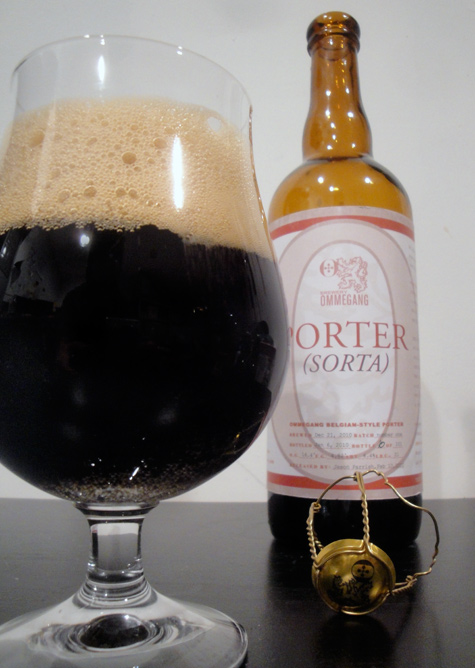 Now that you have some background, time for the fun part, drinking!  The beer looks beautiful, nice and dark, slight brown tone with a big head.   While it doesn’t smell like your typical porter, it has a very pleasing aroma, malty and fruity.  Then again if they were brewing just a plain old porter, I probably wouldn’t be writing this.  You definitely can smell the yeast coming through in this beer.  The first couple sips are very pleasant, very malty almost like a doppelbock; it is also very fruity and sweet.  There is a decent bitterness on the back-end which is helping cut through the fruit and sweetness. I’m not sure if the bitterness is from the roasted malts or the spalt hops.  As I got onto my second glass of the porter, the sweetness really started to get to be to much for me.   I think had it been fermented a bit dryer the fruity esters would have been more enjoyable with the roasted malts for longer then the first glass. I muscled through the second glass and thought the bottle deserved to be finished so I poured a third glass.  By this time the beer was about room temperature, the fruitiness of the beer had been replaced by a very pleasant dark roasted candy sugar flavor.  This beer is very complex, drinking completely different at different temperatures.

While not as good as the Zwaar in my opinion, I think with a couple small tweaks this could be a very good beer.