Officially my first Lost Abbey beer.  The unfortunate reality of living on the east coast, we don’t get many breweries from the west coast.  I suppose the same could be said the other way round or I wouldn’t have had the opportunity to trade beer to get this Lost Abbey Carnevale Ale.  This, like last night’s New Glarus Imperial Saison, the Carnevale Ale is also Saison style beer. 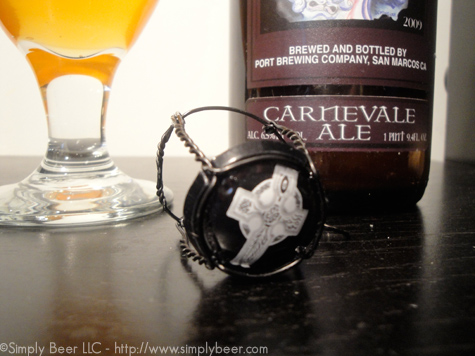 Here is how Lost Abbey describes their beer:

Carnevale is a dry hopped saison ale sporting a hazy yellow color and moderately spicy nose with hints of oranges and tangerines from Amarillo and Simcoe hops. The yeast phenols add layers of clove and allspice. The beer is designed to be a lighter body ale with some malted oats and wheat components and dry hopped with Amarillo to emphasize the bright citric qualities.

Unlike many Saisons or Farmhouse ales, this beer poured with almost no head.  It had an tiny head(watch the video) which quickly fizzed away into a small collar of foam.  The First glass poured a slightly hazy copper orange.  I’m guessing it will become more hazy as the sediment on the bottom get stirred up with each pour. AS I poured the last glass I could no longer see my hand through the glass it was so hazy.

Very strong aroma of tart green apple and pear, holiday spices, and on the very back end,  tangerine & bubblegum.  The bubblegum caught me completely by surprise, but then again Lost Abbey is using Amarillo and Simcoe hops in this beer. 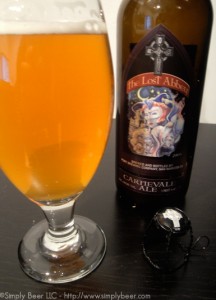 A fairly sweet Saison with all the citrus flavors, but leaves your mouth dry at the end.  This beer has a full creamy mouthfeel at the beginning and then the citrus flavors come out mixed with a bit of funk.  In this case it is a sweet earthy slightly sour flavor.  It reminds me of some the Brett IPA’s, especially with the heavy hoppped backend (for a saison).  And what I really like on this beer is the reemergence of sour at the end as the hops fade away.

Aside from the head on this beer, I rather enjoyed my first delve into the Lost Abbey line of beers.   I have a couple more I’ve acquired in my cellar, the Serpent Stout, Older Viscosity(Port Brewing) and Angles Share.  I’ll be looking forward to sampling more of their Brews.