When a friend, especially a self proclaimed beer geek says “you gotta try this beer it’s amazing”; I went out and got a couple bottles, although it did take me three months to get around to drinking it.  I’ve had several Great Divide beers before and the have all been above par to exceptional, I’m expecting this Russian Imperial Stout to hold the grade. 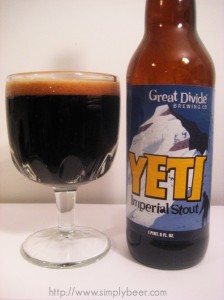 In a challis, give this beer a good hard pour right down the middle to produce an thick rich head and unleash the strong aroma.  In a pint glass, I’d be a bit more conservative on the pour.

Very interesting flavor hits you right up front, a combination of citrus and chocolate.  Which is quickly followed by toasted malt and coffee, finishing with the 75 ibu’s of rich bitterness.

This is a very strong rich beer, personally this beer makes a perfect desert and would not pair it with anything.  Although it could pair well with some dark chocolate.