Magnolia’s Wine & Spirits store is set back from the main street (Valley Road) in Upper Montclair NJ, so if don’t know it’s there you will never find it.  Magnolia’s is a clean and well maintained store, very new looking.  Has several rows of wine racks flanked by hard liquor with several glass cooler cases at the rear. 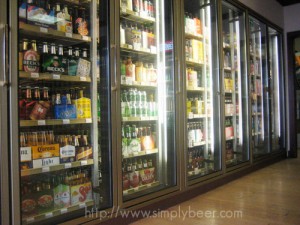 I entered the store, a very open space, two people working putting away wine and there were no other customers.  I was a bit put off because I had to say “Hello” to them first before they acknowledged me, must have been my lack of suit or something.  The store was nicely laid out, but not a huge amount of inventory, there were a couple empty/thinly stocked shelves.  Not being a huge wine guy, it appeared they had a fairly nice selection of wine and run of the mill liquor, but very limited in the scotch/whiskey department.

I didn’t go here for the wine (I always check out the scotch, I love scotch), I went for beer.  What surprised me the most was all their beer was in the cooler, 8 doors worth nothing warm.  There was a very limited selection, however it did cover most of the basic styles of beer.  They had a rack of Macro Beer (Bud, and such), 3-4 racks of Micro brews (Smuttynose, Flying Dog, Cricket Hill, Stone, Rogue, etc), 2 Racks of International (German, Mexican, and Some Belgians) and a rack of 22oz & corked bottles.  There were many beers here that I liked, but very few (2 or 3) I’d never had. I ended up walking out with a 6pck of Pilsner Urquell (for the Pilsner Beer Brawl) and the Saranac Summer Sampler pack.

Over all a decent, well maintained store, is would be good place to quickly stop on your way out for the evening if you were jammed up or to a restaurant, very few Montclair restaurants have liquor licenses.   The have quality, but not much selection so you can be in and out quickly. But, I would not make this my place to go for craft beers because of the very limited selection.