This review is probably just another Three Floyds review to you mid-westerners, but since Three Floyds doesn’t have a wide distribution net in the US, this is going to be a nice (I hope) treat for me.  Coming out of Munster IN, most of us know Three Floyds for their annual Dark Lord release, but they also have quite an extensive portfolio of beer that I can’t get in New Jersey, but I’m slowly sampling through beer trades.  My Buddy Kevin at the Liquor Outlet in Boonton NJ gave me a Moloko Milk Stout which I’ll be reviewing shortly!

Here is how Three Floyds describes this beer:

A hophead’s dream beer. This Imperial India Pale Ale has an opening salvo of mango, peach and citrus hop aromas that sit atop a pronounced caramel malt backbone. Although Dreadnaught is a strong and intensely hoppy ale, its complex flavor is both smooth and memorable.

A bright orange beer, slightly hazy with a good column of bubbles rising through the center of the beer from the bottom.  The beer laid down a good thick, fairly dense creamy head, but only stuck around for a couple of minutes, but did leave a nice ring of foam on the glass as it dissipated. 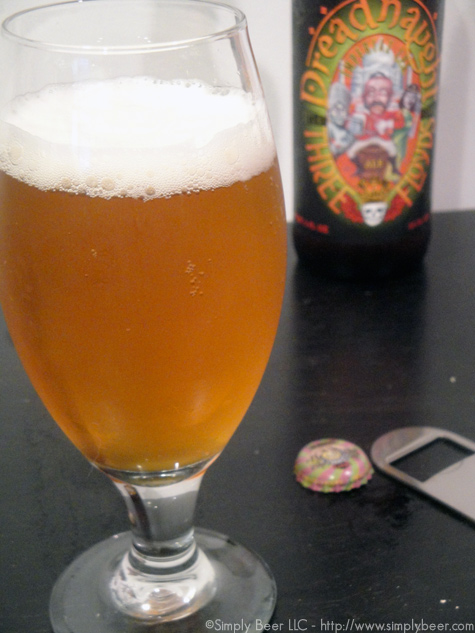 Described as a hopheads dream, the aroma on this beer is friggin’ awesome!  Mango and Peaches ohhh my!  Huge blast of overripe peaches just totally dominates the mango and resinous pine aroma that’s also hanging around your nose.

I’ve talked about it before, you get a beer that is so inviting from the aroma, but then the flavor just totally lets you down, thankfully this is not that beer!  Nice upfront sweet creaminess with a moderate mouth feel, The middle mouth to the finish is the best part of this beer.  The creaminess slowly gives way to a sight bitterness, they you get walloped by this huge brown sugar citrus flavor that totally makes this beer.  Then finishes slightly bitter, but doesn’t linger for a very long time.  A very nice balance of malt, sweetness, bitterness, and citrus.

I’m pleasantly surprised.  Not sure what to expect, Dark Lord is pretty good, but that is the only Three Floyds beer I’ve had.  I loved the aggressive use of hops with out being a bitter palette destroying bomb.  I really like the malty over hopped IPAs, this is a top tier IPA in my book.