Pours a very clear golden color, lots of bubbles gently flowing up trying to keep what little head there is afloat, with not much success.  The head disappeared pretty quickly back into the glass leaving me with a thin collar of foam.

This beer has a bit of a muddled aroma, lots of grainy yeasty character with just a bit of finishing hops on the nose.  I think the “muddled” nature of the aroma is from the undertone of earthiness and a hints of bubblegum that are usually not prevalent in this style. 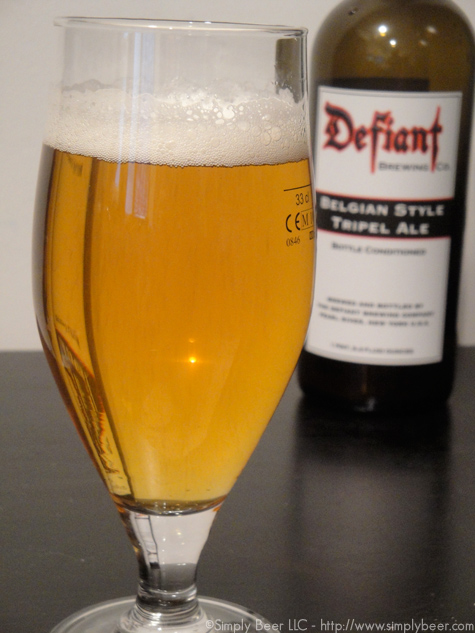 This beer has decent mouth feel, notes of lemon and honeydew along with the traditional yeasty sweet flavors you tend find with the style.  It has a nice transition in flavors through the mouth, including a finish that verges on tart and gives you the impression of a dry finish even though it isn’t. There is also a fairly significant hop profile on the back end of this beer which lends to a earthy bitterness on the finish.

I thought this was a decent Tripel.  would like to see more from Defiant in bottles, they are pretty much a draft only brewery and I rarely seem to catch any of their beers on draft. One thing to note, as the beer warmed up the sweetness really becomes pronounced and was a bit more difficult for me to drink.  I’ve found my palette tends to side with more bitter and sour, sometimes savory then it does with sweet.