This beer comes to me from a great beer guy, Jason over at BarleyPopMaker. The two things I always ask him to send me are New Glarus and the Tyranena’s Brewers Gone Wild beers. Jason had previously sent me a wicked Rye, Bitter Women in the Rye (Awesome Beer), so in this trade he sent me Benji’s Smoked Imperial Porter with Chipotle Peppers.  Now, I’m a huge fan of smoked beer and chili’s, but at the same time don’t want my lips to go numb while drinking a beer. 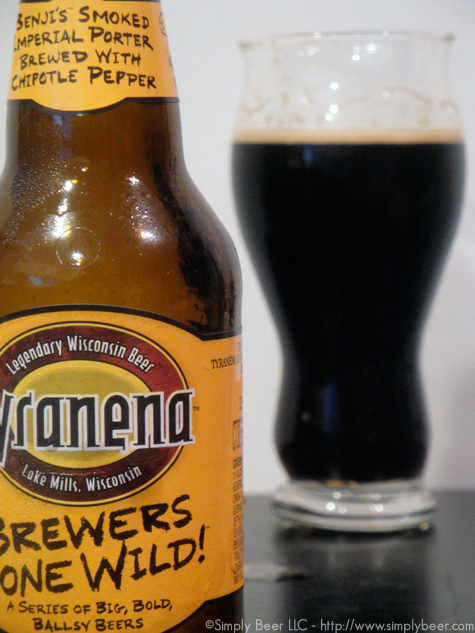 Here is how Tyranena describes their beer:

A very dark brown beer with some pretty crimson highlights around the edges.  It doesn’t have much of a head; it poured initially with a fizzy thin head, but that quickly dissipated.  I like beer to pour with a significant head.  First, I think it makes the beer look a bit more sexy, plus it helps release the aromatics in the beer.  In my humble opinion you don’t just experience a beer by tasting it, you see it and smell it as well. 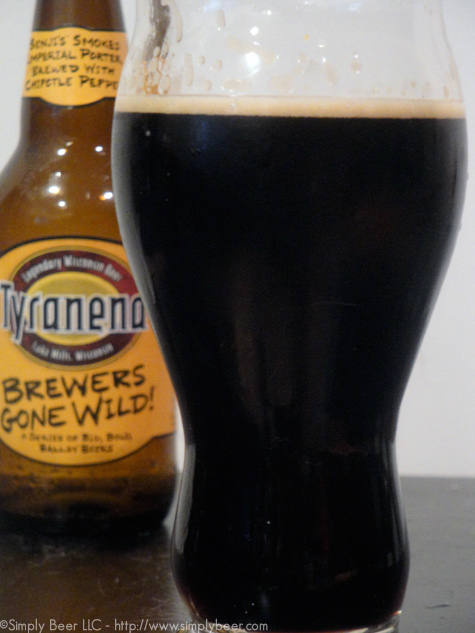 Wow pretty much what I would hope for, but not what I expected.  What does that mean? well, I hoped for a nice blend of spice, peppers, chocolate or coffee, and smoke.  I was expecting one of those aromas to be completely overwhelmingly and dominate the nose on the beer.  But, thankfully what a got was a beautiful harmony of smoke, peppers, and dark chocolate all working to enhance the aroma.

The smoke hits you right up front with a bit of dark chocolate on a velvety silky smooth full mouthfeel.  It then slowly transitions into spice which has the flavor of the peppers with out having the spice or overwhelming heat of them.  The flavor just lingers, the smoke and peppers work so well together and stay on your palette for minutes after your sip. Just awesome!

This beer is a masterpiece of marring some unique flavors to create a harmonious and tantalizing beer.  This is one of the most interesting beers I’ve had this year and so expertly crafted.  Hats Off to Tyranena!