This week we switched things up a bit and focused on a Brewer rather then a particular style of beer.  For this Beer Brawl, we choose to focus on Mikkeller beers.  Mikkel Borg Bjergsø is a ‘gipsy-brewer’, who brews at different breweries in Denmark, Norway, Germany and the United States.  Each beer that is made is unique and may only be a one time limited release. 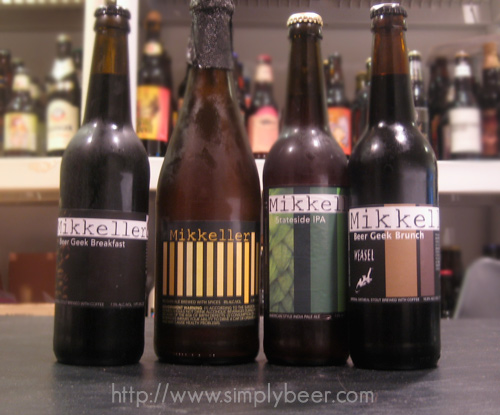 With me on this podcast were Mark Jackson, Will Hogan, and Corey Greenberg.  The only prerequisite I have for these Beer Brawls is a love of beer.  You don’t need to know anything about the beers we are drinking only a willingness to try them and voice an opinion.

What a good hour of drinking! The Wit and two stouts were amazing beers.  The Wit was probably one of the best I’ve had.  The Stateside IPA was just an average IPA, kind of lost between an English and American IPA. The Beer Geek Breakfast and the Beer Geek Brunch were two amazing Stouts!  Both had an extreme amount of coffee, great aroma and flavor.

Next week will be Hefe-Weizen.