Being Easter weekend it should only be fitting that we discuss doppelbock, the Easter beer.  Monks used to drink this high octane beer as a nutrient supplement during the fasting of Easter and Lent.  The doppelbock is a classical German style lager originally brewed over 350 years ago by monks in southern Germany.   This beer is characterized by a golden to dark color and rich malty flavor.  Medium-full to full body. Moderate to moderately-low carbonation. Very smooth without harshness or astringency. 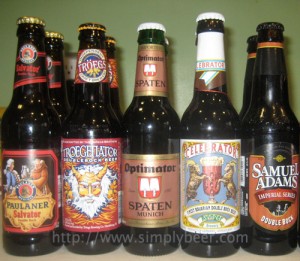 The first beer of the night was the Paulaner Salvator.  The Minim monks who originally brewed Doppelbock named their beer “Salvator”, which today is trademarked by Paulaner.  This beer blew all three of us away.  It really was the definition of this style of beer and for what all the other beers tonight was compared too.

After this amazing beer, it was hard to choose, but we decided to jump back across the Atlantic to an American beer, the Sam Adams Double Bock.  This was a much darker beer then the Paulaner and had a much different flavor.  While a decent beer, it was not as smooth, but had a nice warming feeling.

So continuing the trend, we skipped back across the Atlantic to Munich for the Spatan Optimator.  This one was even darker then the previous two and had some subtle chocolate notes.  As a group we tended to like this better then the Sam Adams. 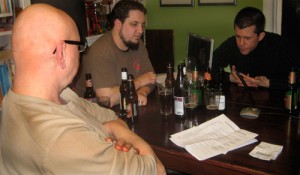 Back to the States for the Troeg’s Trogenator, it was lighter in color then the Spatan and was much smoother, very close to the Paulaner in taste and flavor.  Score one for an American version of a German classic.

And finally the German Celebrator, having this beer in the past I was excited to see how it would stack up against the previous 4.  Even though it was not the Paulaner it was as good as I remember it.  While Corey was not impressed by it, Mark also had a good impression of the beer.

It was obvious the winner this week, but the way the rest of the pack stacked up for each of was unique.

Up next time, American Brown Ale.  If there is a style of beer you think we should put up to the test in our Beer Brawls, drop us an email or leave a comment.