I think this is the first beer I was confused on how to drink it.  The Unibroue Quelque Chose has a label hanging from the next of the bottle with drinking instructions… huh? The label tells you to drink it as a hot “cider” or as a cold summer drink.  I choose the later, since it summer, but the hot cider concept intrigues me.  I like many beers at room temperature, but I’ve never had a warm beer, perhaps another time.  As a cold beer: 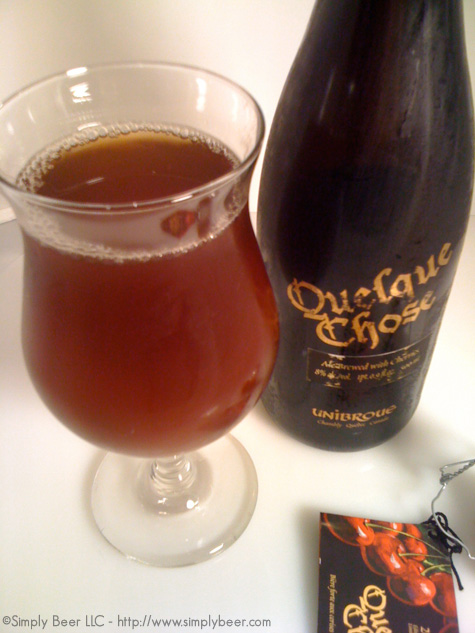 No carbonation or head to speak of in this beer, not sure if that is the way it’s supposed to be… The beer it’s self is a dark red / mahogany color.  Pretty plain in the appearance department.

Now this beer is getting interesting, it has more of an wine aroma than beer.  The cherries are very strong in this beer, a bit acidic on the nose as well.  There are some underlying spice aroma, like cinnamon and apple cider.  Oddly intriguing, makes me want to try this beer! 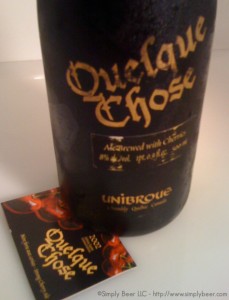 Wow, I’m impressed.  I can see drinking this beer hot, it does taste like apple cider with cherries.  Amazing, has the very strong cherry flavor with out being overwhelming or sickeningly sweet. Has a bit of acidity, but that doesn’t really translate into a tart or sour taste.  The taste really sticks to your teeth.  Funny, but you can actually lick your teeth and re-taste the beer.  Although, I’m having a hard time calling this a beer, I don’t taste the grains, malt, or hops (if there are any).

I think I’d like to try this beer on a cold day, hot.  At 8% abv it’s not a session beer, but the alcohol is well masked under all the cherry and cider flavors.  I took my time drinking this beer, let the flavors subside from the after taste, then another sip.  The overall impression of this beer improves as it warms up, but the aroma and flavor profile pretty much stayed the same.  Had a funny thought as I was finishing this beer thinking about how it would be hot, I bet it would make a damn fine Popsicle too!

Calories: 8% abv with a lot of fruit, I would error on the high side.  I would estimate this beer having between 260-300 calories per 12oz serving (ABV Calorie Chart)

Simply Beer Rating: 87 – Go out and try this beer!

What do you think of this beer, leave us a comment.