This was given to me, by Kevin at the Liquor Outlet in Boonton NJ.  He said he hadn’t tried it, but knowing I’m a hop head, he thought I could kick the tires on this beer.  And Kick I will! The Harpoon Leviathan Imperial IPA is one of five beers in Harpoon’s Leviathan series, which include a Saison Royale, Big Bohemian Pils, Quad and a Baltic Porter. 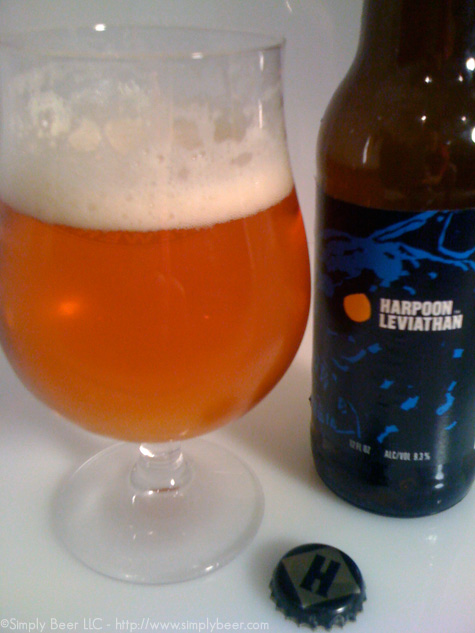 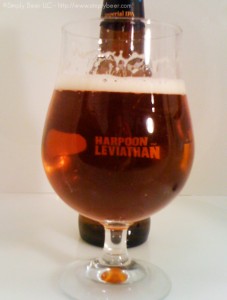 Holy Clarity, Batman!  This beer has to be the clearest beer I’ve seen, especially from a dry-hopped IPA.  It pours a crystal clear copper color with a moderate head.  Unfortunately the head quickly dissipates to a thin collar.  I think IPA, especially American and American Imperial IPA’s need to retain the head to continue to release the wonderful hop aromas.

I dig this aroma, at first it just had a sweet candy aroma. As you take in a couple more whiffs, it has this interesting  earthy / pineapple / citrus / fruity aroma with a hint of alcohol.

The Leviathans mouthfeel is a bit thinner then I thought it would be, which is not a bad thing, I just had a notion in my head of what I thought the beer would taste like based on the aroma. This beer has 122 IBU’s and you can taste them all.  It is a very hop heavy beer, but surprisingly not a very bitter beer.  This beer has a good bit of malt sweetness (my initial sense from the aroma) and a very nice transition of several flavors from the hops.  Unfortunately for this beer the Alcohol is a dominate player in the flavor unlike Harpoons Big Bohemian Pils at 9% which had no noticeable alcohol presence.

The alcohol plus the sweetness really gives this beer a rum aftertaste, if you like that, you’ll love this beer, if you don’t you won’t.  This is a 9.3% abv beer, so a bit of alcohol should not be surprising, but with this beer it really factors into the flavor.   I liked the  the well balanced bitterness, (especially with 122 IBU’s),  the unique aroma, but for me the slight rum aftertaste didn’t fit into this beer.

Simply Beer Rating: 86, give it a try and let the world know what you think!