Another beer in Brooklyn’s ever increasing Brewmaster’s Series, this time the Sorachi Ace.  The Brewmaster Series are a seasonal or limited release styles which are only available on draft.  The last one I had was the Cuvee de Cardoz, an absolutely amazing beer which I can’t wait to have again. The Sorachi Ace is a farmhouse ale featuring the rare Japanese-developed hop Sorachi Ace. 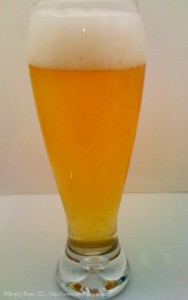 Out of the Growler, this beer was slight hazy, straw color.  It had a big billow snow white head which left some decent lacing on the glass as the head settled.

Very interesting aroma, especially for a farmhouse ale.  The aroma which dominates is lemongrass, but there are notes of tobacco and honeydew.

The lemongrass comes through on the flavor as well, but there is also a nice dry peppery/spice finish.  Good carbonation through the mouth, even out of a 2 day old growler.  Crisp is a good way to describe this saison.

Great refreshing farmhouse ale, totally different then what you’d expect in a traditional version.  The Sorachi Ace hops really work well for this beer.  The lemongrass really gives this beer a crisp taste that borders on tart.  Well worth hunting out.

What did you this of this beer?