I found this beer at my local Stew Leonard’s Wine shop in Clifton NJ.  I bought this beer for two reasons, first I’ve never had an Avery IPA and second I didn’t have any IPA on my shelves at home.  No IPA’s on hand for a hop head is a problem; I seem to have every other style of beer at the ready.  The DuganA IPA is Avery’s Double IPA, which they proclaim to be “brutally bitter”.  Lets see just how this beer holds up! 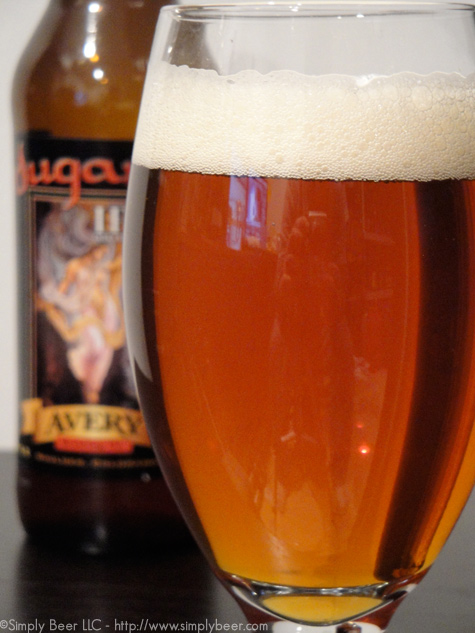 Lupulin Rapture Incarnate! As fervent  devotees of hops, we found ourselves on a quest to create a transcendental IPA capable of quenching our voracious lupulin desires. Our mantra became “unity of bitterness, hop flavor and aroma.” Enlightened, duganA IPA was born: A brutally bitter, dank, piney and resinous ale designed for those seeking a divine hop experience. 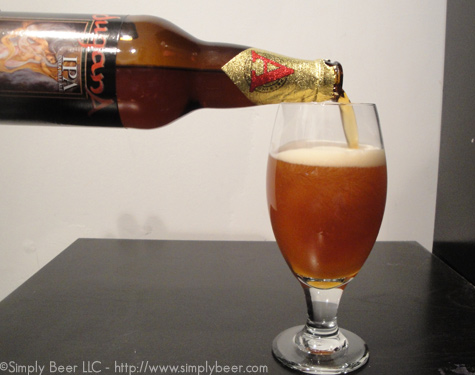 The beer poured out a crystal clear amber color with gold/orange highlights.  The head was fairly billowy for a couple of minutes before receding back into the beer.  Initially not much in the way of head retention,  a second pour out of the 22oz bottle lead to significantly more head retention.  I must have not have done a good job cleaning the glass. 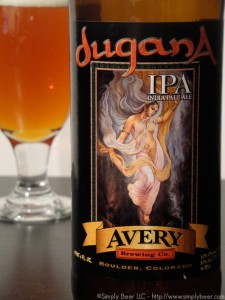 At 93 Ibu’s listed on the bottle at 8.5% abv,  I’m expecting a big nose.  Thankfully, I was not let down.  The beer has a very deep piney, citrus aroma with hints of brown sugar.  it is a very pleasing aroma to me.  While I dig some IPA’s that have the floral bubble gum citrus flavors, I love the deep piney smell more like in this beer.

Although, the problem I usually have with the deep piney aroma I love, is the beers are usually to bitter for my palate.  Now, the bottle of Avery DuganA describes this as a “Brutaly bitter” beer. Well folks, it is just that!  It was a very bitter bitter.  There is a ton of caramel malt up that blasted by a citrus hop burst then a earthy lingering bitterness.  While a bitter beer, unlike a lot of others I’ve had, that bitterness didn’t compound on it’s self, but left you with a seriously hoppy beer.

It was as the bottle describes, intensely bitter, dank, piney resinous ale.  If that is what you are looking for in a DIPA, then you have found your beer.  I felt the bitterness was intense, but didn’t cross the over that overbearing line (but not by much).  Also the aroma, was amazing, intense and piney… loved it!  Good beer, go out and try some if you can get it.