I have not reviewed many porters, which kind of surprises me because I really enjoy them and tend to gravitate to them.  Having had a fairly good run lately, with the Victory Brewing Company, my expectations for their beers have been raised.  Their Prima Pils won Beer Brawl 8 – Pilsner and the Victory Saison, from Beer Brawl 6 had some good flavor that we enjoyed, so hopefully this Baltic Porter will live up to it’s sister beers. 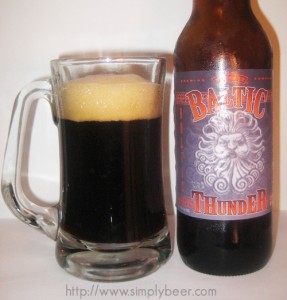 Starting with a nice easy pour transition into a hard pour to really open up the head.  This left me with about an inch and half of head.

Poured a very dark mahogany color with ruby highlights, good froathy head.  The head quickly dissapated into a thin amber layer common with the style because they tend to be moderately carbonated.

Toffee and chocolate, bit of plum and a stong malty smoke presence, all fairly well balanced together.

This is a very malty beer, the upfront malty coffee flavors transitioned to chocolate then to sweet toffee rounded out by a bit of bitterness.  Also present some mild fruit esters of raisin and plum and a strong effervescence from the carbonation.

I enjoyed this porter, It had good flavor and appearance.  The 8.5% abv was masked fairly well with the malt, complex with many different flavors, and had a nice mouth feel.

This would be a great compliment to some smoked ribs with a sweet bbq sauce (not spicy).