Over the last year, there have been a couple Breweries I tend to gravitate to because they impress me with their beers.  Great Divide Brewing Co is one of those breweries.  I have reviewed the Yeti Imperial Stout, The Hercules DIPA, and Fresh Hop Pale Ale which were all must try beers and received good scores.  Time to see how the Hades Belgian Style Golden Ale lives up. 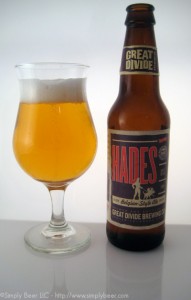 Quite yeasty, with a sweet malty funk.  Funk is not necessarily a bad thing.  It can make for a very interesting aroma.

Very Interesting complex flavors going on here.   The beer starts with a subtle sweet candy like flavor, which is quickly washed away with a mouth filling effervescence.  This gives way a dry yeasty bready flavor, which isn’t like a American or English Pale Ale, is enough like them to remind you of a Pale Ale flavor.  As the beer exits your mouth, it leaves you with a slight spiciness and hop bitterness.  But just when you thought it was over, there is a bit of alcohol heat that comes through right on the end.

Good Color and Aroma topped by a nicely complex beer that I found to be nicely balanced.  While there were lots of flavors, one didn’t dominate another.  7.3% ABV shows through on this beer a tad to much.  I would buy this beer again, definitely worth a try.

Calories: This beer fairly dry, which would lead me to believe it had a good attenuation putting this beer around 215-230 calories. (see Calorie Conversion Cart)