On July 14th, I attended a Lecture event at the American Museum of Natural History in New York featuring Garrett Oliver from Brooklyn Brewery.  This was a segment in AMNH on going series called Global Kitchen.  This segment featured a 30 minute talking piece by Garrett Oliver followed by a tasting of some of Brooklyn small batch beer. 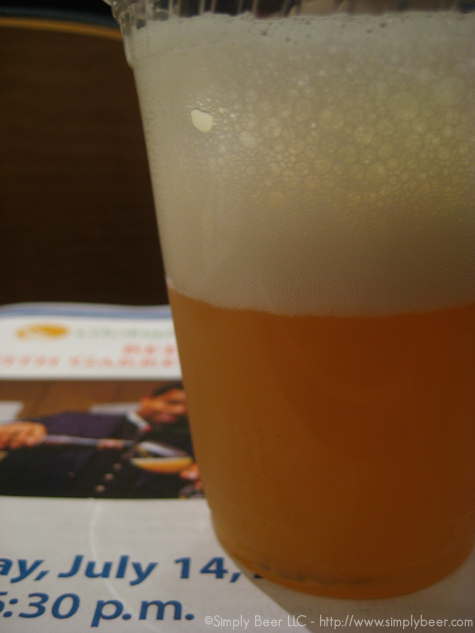 I have seen several “webisodes” featuring Garrett Oliver, but not having seen him speak in person, I was really looking forward to this event.  However, due to a string of unforeseen commuting issues, we were about 10 minutes late to this event.  We left Montclair (20 minutes west on NYC) at 4:30 for a 6:30 event, so I figure that gives us plenty of time to get to the city have a beer when we get there and good seats.  Well… our decamp bus never showed up!  So, we decided to drive to the park & ride, we take a wrong turn end up on the NJ Turnpike going south.  But, we found our way to the Seacaucus train station and then had to wait another 15 minutes for the train, which of course gets held up in the tunnels into Penn Station.  Finally get off the Train, head for the A train uptown.  We are running on autopilot at this point since we are going to be late; wait another 15 minutes for the A train and I completely forgot it doesn’t stop at 72nd, so we have to get off at 59th, cross the platform and wait another 10 minutes for the C train.  After getting up to 72nd street, we basically run to 77th st in 80° humid NYC summer weather.  BUT, we did make it.  I have to be early to everything, so this travel ordeal must have made my blood pressure rise a 100 points!

Even though we were late, it was well worth the agony of the trip.  Garrett Oliver talked for about 30 minutes about the rise and fall of beer in Brooklyn, NYC and the United States.  He is a very eloquent speaker and I really loved the antidotes he used.  He got some good laughs from the 70 or so people there.  It seemed as though most people were fascinated by what he was saying, even though we all really wanted to sample beer, especially since there was one beer up there that had no label…

The last tasting tasting I was at for Brooklyn, there was also a bottle with no label.  That was an unreleased ale called Dark Matter – absolutely amazing beer.  I was very excited to get to the unmarked beer, but first were two beers I’ve had many times before.  Brooklyn Local 1, still as good as I remember.  A strong Golden Ale with great aroma sugary and sweet with a bit of hop and a tickle of orange.  Then the Local 2, my third tasting of the beer.  Unlike the Local 1, this was a dark Belgian Ale with lots of spice, hits of chocolate  and raisin. 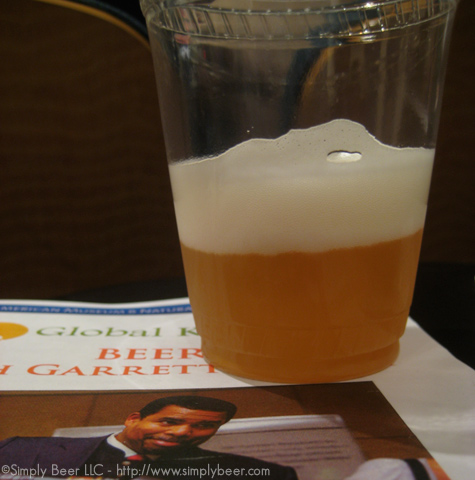 Next, the one we were all waiting for, the unlabeled Bottle.  As it turned out there were 5 cases of this years BrewMasters special reserve, the Cuvee De Cardoz, that was bottled, the rest kegged and only available at select bars. Poured a light copper hue with good retention and lacing. the smell was an estery yeast and some caramel sweetness. the flavor had cardomon, clove, pepper, candy sugar and full blown esters. A complex and well crafted ale that I really enjoyed.

The last one, the Brooklyn Schneider Hoppen-Weisse.  I love this beer, a hoppy weisse beer, combining the best of both worlds from an American IPA (Hops) and a German Weisse (Unfiltered wheat with Banana and clove esters).

All great beers, if you haven’t had any one of these, if you find them, get them.  They are well worth a draft or 750ml bottle.

My only issue with the tasting was the plastic cups, although these were far better then the ones from the Stone tasting.  I understand that they are more economical, at least these didn’t take away from the taste of the beer.  But, I would gladly pay a couple dollars more for teh tasting to have nicer tasting glasses and something I could take home. 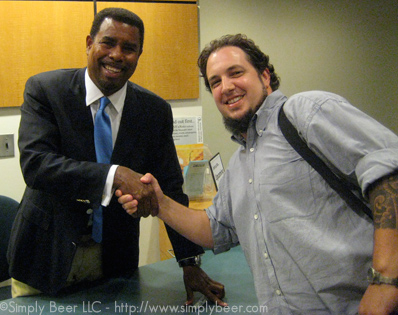 Meeting Garrett Oliver, after the lecture

I’m looking forward to other Brooklyn tastings, lectures or dinners.  As you can see from this picture Mr. Oliver was very approachable and was willing to spend a few moments speaking to anyone after the lecture who wanted to talk with him.