To date, this was the one I was looking forward to the most.  All the previous podcast we’ve done, we have been sampling the beers either by bottles or cans, but for this Beer Brawl we have the luxury of Draft.  If you are familiar with Andy’s Corner Bar or your local Beer Bar, Andy’s rotates through the taps quite frequently.  With the rotation, we basically were going into this Beer Brawl blind, not really knowing what we would be drinking. 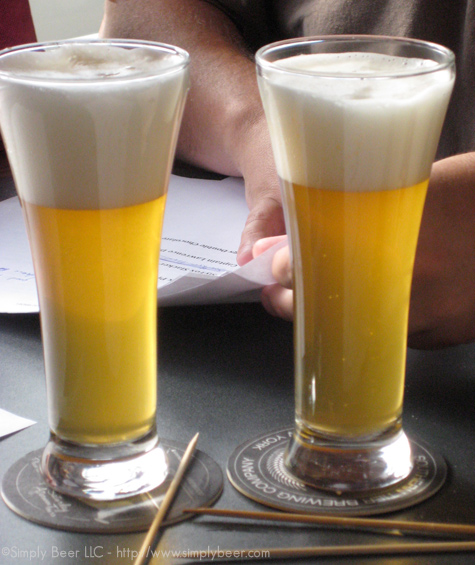 With me on this podcast was Mark Jackson, Corey Greenburg, and Will Hogan.  The only prerequisite I have for these Beer Brawls is a love of beer.  You don’t need to know anything about the beers we are drinking only a willingness to try them and voice an opinion. 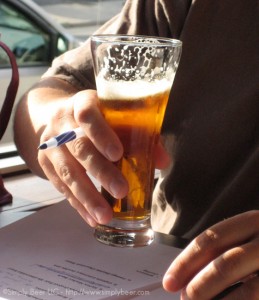 We all agreed this was a nice change of pace, first recording outside of the Beer Cave and secondly the luxury of draft beer.   We started off with an exceptional Wit beer, Blanche from Weyerbacher.  We all thought this was a refreshing, full bodied, well-balanced beer.

The Brooklyn Weiss was next.  One of the things I really love about Andy’s, they always pour the beer into appropriate glassware.  We were drinking half glasses, so we didn’t have the full experience of the weizen glass with this beer.  None-the-less, the beer had a pleasant aroma and good flavor, but was missing on the back end.

The two Slyfox beers were next on the hit parade, unfortunately they we not big hits among us.  The Project Pale Ale had a burnt flavor that keep on compounding making this beer more and more unpleasant to drink.  And the Slacker Bock, it just didn’t seem to have an identity, falling short in our books.

Thankfully for us, the Captain Lawrence cask Double IPA was up next.  It was arguably one of the best IPA we have had.  Right up there with Pliney the Elder.  It had a wonder aroma and well balanced flavor.

We ended off the night on a controversial sample of Young’s Double Chocolate Stout.  My beer was far different then the others, with strong butterscotch and chocolate aromas and flavors.  Both Mark and Will’s beer was chocolate with out the lushness I had in mine.

Next Podcast will be recorded from Amanti Vino in Montclair, NJ. For our 20th podcast we’ll be celebrating with a bunch of Barley Wines!