Another Thursday night more beer to drink.  I’m really loving these Thursday nights, drinking several beers of the same style from different breweries is a real treat.  Tonight we are serving up Witt, which is a style of wheat beer.  This style of wheat beer is generally characterized by both flavors and aromas of coriander, orange peel, and lemon and as with wheat beers it is typically hazy.  A Witt is not your typical wheat beer, nor is it a hefeweizen, it is a uniquely flavored beer.  As with many unique styles, your local liquor store will probably not have a vast selection, we had to go to 3 liquor stores to find 4 to review in this beer brawl.

Tonight we started with the Wittekerke, which neither of us could pronounce.  The six pack box for this beer said it was a witt.  There is no way this beer was a witt, it was simply a wheat beer, no floral aroma, not taste of orange or coriander.  Not the best way to start off the night.

Having started with a Belgian beer we figured we have the other non domestic beer, the Hitachino Nest.  This beer was 180 degree difference from the Wittekerke.  This beer had a wonderful aroma, but it stopped there.  The beer had a striking lemon flavor that unfortunately completely overpowered the beer. 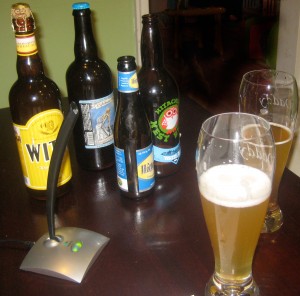 After missing on the first two beers, the Ommegang Witte was next on the chopping block.  Lucky for us this beer was nicely balance both in aroma and taste, even thought these aromas and flavors were far less pronounced. This beer also had a fairly pronounced bready flavor, which I enjoy, but not everyone does.

Finally at last the third beer was enjoyable, and onto our 4th and final beer.  By picking beer at out local liquor store, we never know what were gonna find, hence the 1 of 3 record we have going so far.  The Calabaza Blanca White Ale was the last in tonight’s firing squad.  Luck for us it was similar to the Ommegang, but more fragrant and a bit more bitter.

All in all mark and I agreed on the First two beer’s but cam down to a split decision on the winner.

Up next week, Pale Ale.  If there is a style of beer you think we should put up to the test in our Beer Brawls, drop us an email or leave a comment.