After a month long hiatus with the Beer Brawl™ we are back in full swing.  This time ’round we are pulled out the Big Boys and sampled nine Belgian (style) Quadruples.  Of the Belgian Trappist beers, the Quads are biggest in terms of ABV and also some the more interesting flavor profiles.  As we found with the nine quads we tried, they varied quite a bit in flavors and we all over 9% abv. 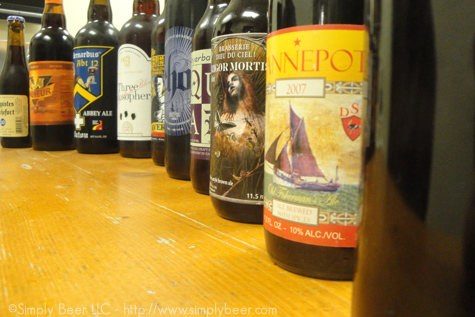 Joining me on this podcast was Kevin Malavarca from the Liquor Outlet in Boonton NJ, John Hoyos from Hunter Distribution, and Jim Galligan from The Beer and Whiskey Brotherhood.  The only prerequisite I have for the Beer Brawl™ is a love of beer.  You don’t need to know anything about the beers we are drinking only a willingness to try them and voice an opinion.

Download the podcast and listen to all the details about how these Quads stacked up against each other. But if you don’t have time to listen, here are some Tasting notes:

This was a big malty beer.  Lots of dark fruit (Raisin & prune) and yeast on the nose, a complex beer, like all of the Belgian quads we tried.  The flavor was also malty, a bit thin on the mouth feel, peppery warm from the alcohol, almost medicinal.  Overall this was one of our favorites, it was a great example of the style, and frankly should be since it was one of 2 Trappist Quads we sampled.

I’ll be in great shape as soon as I learn how to pronounce the name of this Belgian beer. But I digress, the aroma came in with a big alcohol nose, earthy and very malty. The dark fruits like in the Rochefort were also present in the aroma.  The flavor was quite a bit different, caramel, honey, earthy and a big rum punch at the end.  There was no hiding the alcohol on this beer. 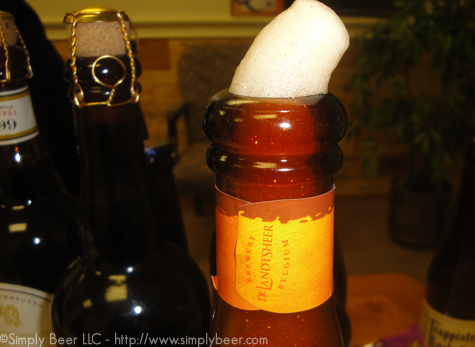 This beer was a bit different then the previous two; it was still a Belgian beer but from the Flanders region. It was lighter and crisper, doughy, yeasty with a bit of sour on the finish.  As soon as I saw it was the Flanders region, I was expecting there to be some sourness in the beer since this is where the Flanders Red style originates from. This, while enjoyable, was not one of our favorites of the night, the flavors were a bit disjointed.

This was an interesting Belgian Style Quad; it combined both a quad and a cherry lambic.  As Jim aptly described it “Smells like a twizzler”.  It had a strong cherry, caramel, and malty aroma which carried through to the taste, with a touch of chocolate on the tongue.  That made it a very interesting beers and one of my favorites of the night.

The 2nd American Quad of the night.  This beer had an intense rum, bread, yeasty aroma.  Also, an interesting spicy and hop bitter flavor that really set it apart from the other quads.  It also made us question if it should be considered a quad, but who are me to judge 😉

This was 3rd American Quads we sampled.  This one brought us back to more of a traditional quad.  It had a really nice aroma of cherries, raisin, and rum.  Fairly thin mouthfeerl with lots of carbonation.  It also had that dark fruit flavor, bit of chocolate, roasted malt and rum.  We thought this was a pretty decent Quad, good beer to try from Sly Fox.

The last of the American Quads, was the most bizarre.  There was banana esters all over this beer.  All four of us experienced this off aroma and flavor in this beer.  Banana is something you expect in many German wheat beers, not Belgian style Quads.  As a result we were not big fans of this beer.

This beer hails from Montreal Quebec and struck us right away with a big complex aroma of coffee, chocolate, raisin, and alcohol.  The flavor was equally impressive with John noting it as “chocolate gold” and Jim coining the phrase “Utilized Alcohol”.  We all agreed this was one of the best beers of the night.

This was a wow beer right off the nose.  Raisin, port, with a touch of light coffee created an amazing bouquet.  The alcohol was well masked in this beer, lots of that dark fruit, bit of chocolate and a hint of cinnamon rounded out the palette.  Without question the unanimous winner this night!

We had high expectations for this beer and were partly let down.  It was not as amazing as we had hoped for, while it was very good, no beergasm here.  Still had a fairly significant heat to it, especially for the age of the beer, lots of raisin and port aromas and flavors in the beer.  Felt cheated especially after the Pannepot.

I’m working on future Beer Brawls™, we have a Porter Beer Brawls™ coming up. We’d also love to hear your suggestions!