Another gift from the mail man, this was sent to me by a friend in So. Cal (thanks Lance!).  Lagunitas, in my book, consistently puts out good beer, which is why I was excited to try this limited release of Little Sumpin’ Extra! ale.  This is a 8.7%, 72 IBU imperial IPA, guessing from the the Lagunitas beer I’ve had in the past I was anticipating a big bold hoppy IPA.

This beer has a pillowy cushion of foam sitting on a clear amber beer.  Decent head retention on this beer with a good bit of lacing.  There was a constant stream of bubbles rising form the bottom of the glass.  It looked like a little mini tornado of bubbles 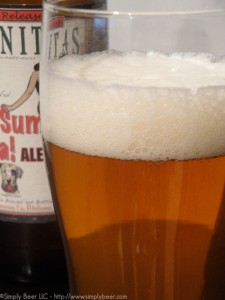 Very rich aroma, what a double IPA should be.  This beer has a very piney resiny, floral, pineapple citrus, and brown sugar aroma.  I’m really enjoying this aroma.  It’s one of those aromas you can keep smelling and be content with just the aroma.    I found myself doing just that.  I probably smelled the beer for a good 2 minutes before drinking; it was extremely pleasing.

Wow, the 72 IBU’s in the beer comes up and smacks your taste buds.  The flavors are very strong and I’m not just talking about the hop bitterness, but the grapefruit and the sweetness.  They all seem to be competing with one another, but in the beer it seems to work.  In the end the hops win out with a significant lingering grapefruit bitterness.  If you read my reviews regularly, you know I’m not a fan of overwhelming bitterness in beer.  Even though this beer does have a significant bitterness to it, there is enough of a malty creamy sweetness to keep this beer somewhat in check.

Glassware: Nonic, Tulip, something with a lightly tapered in lip.

I hadn’t had an IPA in several weeks; this one really pushed my taste buds into overdrive.  A powerfully flavorful beer, teetering the precipice of to much bitterness, but never pushing me over the edge.  It also has me excited for this years release of Brown Shugga.