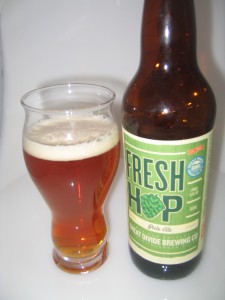 Give this beer a nice even pour with a bit of distance at the end to build a nice head.  This will also open up the aroma.

Will not be disappointed, a nice dry and super hoppy beer.  Although it doesn’t have the IBU’s of an Imperial Pale Ale or IPA, the hops really shine though.  The hops are pretty intense and very refreshing.  After you get past the intensity (not bitterness) of the hops, there is a very nice citrus – grapefruit flavor.  Not a complex beer, but flavorful.

A Very nicely balanced beer.  Very heavy on the hops, but nicely balanced  with some sweet malt that brings out a nice sweetness.  Unfortunately, I finished the 22oz bottle before I realized it.  The beer was very refreshing, almost opened a second bottle.