Quercus Vitis Humulus is Latin for

Quercus Vitis Humulus is Latin for Oak Grape Hop.  Quercus Vitis Humlus is the latest beer from Otter Creeks imperial series.  Most of us remember Otter Creek as an unimpressive brewery, but over the last year that has changed dramatically.  Their first beer from this line was an incredible Russian Imperial Stout, followed by an equally impressive Imperial IPA, and now this very unique sounding Quercus Vitis Humulus.  This beer is a barley wine, that has been referemented with french grapes and then aged on lightly toasted oak. 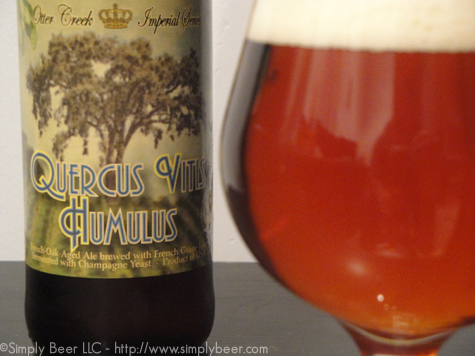 It pours a beautiful garnet color, with a think head.  The head lasted for a couple minutes before dissipating into a thin head. 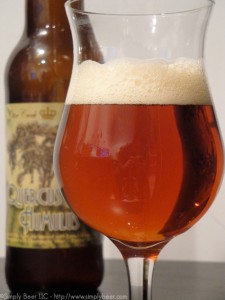 Beer has a sweet grape aroma with a slight cotton candy and a very mild oak undertone.  Take a couple of minutes to enjoy the aroma.  It isn’t powerful, smack you in the face, but the subtle aromas are complex and very inviting.

This is a unique beer.  It doesn’t taste like any one particular style of beer.  Even though it started off as a barleywine, it has very little of those barleywine qualities left, except for a bit of upfront maltiness.  Good strong alcohol component to this beer which works well with the sweetness.  The beer finish with a big hop bitterness.

A very enjoyable beer, although the oak really didn’t come through.  The malt, hops, and grape sweetness really made this beer come together.  This is a great next step in the revamping of the Otter Creek reputation.