My buddy, Mark and I have been drinking beers together for several years and coming over for Thursday dinners for quite some time.  Lately he’s been bringing over 4 bombers of IPA’s and it became a natural comparison of the brews – what we liked, expected, and disliked.  We kept have great such great banter about the beers; my wife finally said why don’t you guys do this ever week.  Pick a style of beer; we each get 2 bombers (22oz) bottle and compare.

So for our trial run, Mark brought all the beer, IPA’s 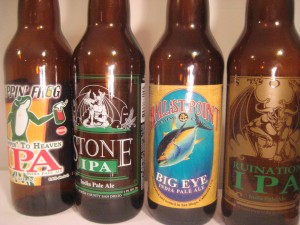 I think for this, I’m not going to dissect the beers like the regular reviews I do, but more of a contrast and “winner” of the group.  First up, because I liked the label, was the Ballast Point Big Eye IPA.  A wonderful start to this experiment, extremely floral bouquet, very nice flavor.  We both enjoyed it.  Next was The Hoppin’ Frog IPA, also a very hoppy well balanced IPA, very cloudy with lots of sediment, but much more bitter.  Next was the Stone IPA, much lighter the previous two.  Not as hoppy or aromatic as the previous two. Mark made a very interesting point, this beer would have been so much better had it been the first beer.  Not as much hop or malty-ness as the others, but still a good beer.  Had we had this one first we could have worked our way up into the IBU’s.  Finally was the Ruination IPA, a dramatic step up in the hops and bitterness (100+IBUs) was a good step from the Stone IPA.  Very good beer, well balanced.