This week’s beer brawl was completely impromptu.  I have a lot going on this week, so this was not planned, but I felt that you all would like to hear another brawl instead of waiting another week.  Because of the quick planning I used beer that I had in my Beer cellar, I had 3 750ml bottles of of Belgian Saison ales.  This style of beer is supposed to be dry and refreshing low hop profile with subtle notes of citrus and/or pepper. 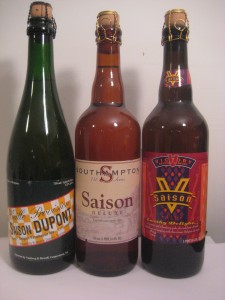 Joining me this week as usual was Mark Jackson, Corey Greenberg on the Audio and our first time Guest Will Hogan.  The only prerequisite I have for these Beer Brawls is a love of beer.  You don’t need to know anything about the beers we are drinking only a willingness to try them and voice an opinion.

Healthy Discussion over the beer

First up tonight was the Victory Saison, while we all liked the taste and flavor of this beer it really didn’t hold up to what the Saison Style should taste like, but an A beer none-the-less.  Next in our glasses was the South Hampton Saison, we’re not sure if this beer is from South Hampton NY or PA, the label was a bit confusing about that.  Nonetheless, This beer was superior to the Victory; good think head, lots of carbonation, dry with notes of citrus and a bit of biterness.  A nice crisp complex beer.  Last but certainly not least was the Saision Dupont, this beer turned out to be the gold standard of the beer.  Explosive from the opening, poured a huge white head, very crisp, obviously a very low attenuation.  Great flavor, citrus, pepper phenols and a nice round of bitterness.

You can hear the whole discussion on iTunes

or listen here on Simply Beer:

Up next time, American Brown Ale.  If there is a style of beer you think we should put up to the test in our Beer Brawls, drop us an email or leave a comment.