Since we are still waiting for our Sink the Bismark to round out our High Octane beer brawl, I decided that we would should each raid our cellars and bring out some unique beers.  So after much internal debate, three of us met up at the Liquor Outlet in indulge in some epic beers. 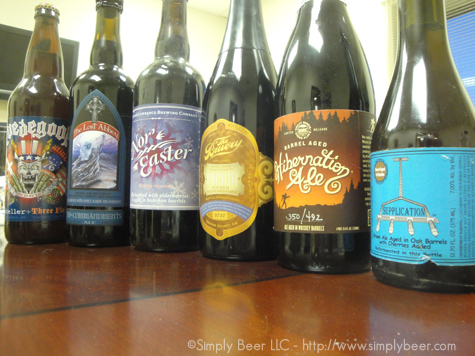 Joining me on this podcast was Kevin Malavarca from the Liquor Outlet in Boonton NJ and John Hoyos from Hunterdon Distribution. The only prerequisite I have for the Beer Brawl™ is a love of beer.  You don’t need to know anything about the beers we are drinking only a willingness to try them and voice an opinion.

Download the podcast and listen to all the details about how these Amazing Beers stacked up against each other.

The first beer of the night was a collaborative beer with Mikkeller and 3 Floyds.  This 10.4% abv beer was very Barley wine like with a heavy sherry sweet nose.  The beer had a good round flavor with a surprising strong dry Bitterness.

This southern California beer had a great aroma and flavor of raisins and honey, and almost minty.  We assumed the minty herbal flavor was a result of aging rosemary in the beer. Like the first beer was also very good and finish very dry.

WOW! enough said. Probably one of the best beers any of us has had.  This beer was just about perfect.  Amazing aroma and flavor that just didn’t quit.  I’d horde this beer if you can find it.

WOW! enough said. Probably one of the best beers any of us has had.  This beer was just about perfect.  Amazing aroma and flavor that just didn’t quit.  I’d horde this beer if you can find it.  Wait didn’t I just say that, well it was another OH MY GOD type of beer.

How do you follow up two nearly perfect beers?  Well try a Captain Lawrence, another awesome beer.  It aged very well, the elderberries became a nice compliment to the beer allowing the bourbon aged ale to come through very nicely!

lover of sour beers, this was a great “kreik” to finish off the night of a shit ton of amazing nectars.  This sour ale has been aged in oak barrels for over a year with sour cherries added.  Great sourness, not quite puckering but great flavor and complexity.

I’m working on future Beer Brawls™, we have a High Octane, Dogfish Head, and Porter Beer Brawls™ coming up. We’d also love to hear your suggestions!