So I’m really late writing up Beer Brawl 4 –  American Pale Ale.  Here it is Monday night, and I’m just getting to this… oh well. So last Thursday we splurged with 5 brands of Pale ale and we were all hoping it was going to go better then last weeks Witt brawl.  American Pale Ale’s are characterized as a cleaner crisper ale then the British counterparts.  The American Pale Ales are also notably heavy on the hops and tend to have taste notes of Citrus, Pine nuts, and Caramel. 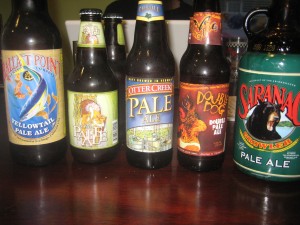 First up was the Growler of the Saranac Pale Ale, we all agreed that this was a great way to start off the night.  This is a great example of a typical Pale Ale.  Definitely a great beer for the money.  Next, The Otter Creek Pale Ale, another drinkable pale Ale.  Nothing particularly spectacular about this beer, it was good, but it got lost among the other beers.  Ballast Point Pale Ale, while a good beer should never have been part of this crew since it is a British/European pale ale… So onto the next, 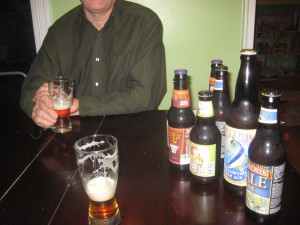 literally an explosive Beer, the Founders Dry Hopped Pale Ale practically exploded when I popped the top, a huge rush of co2.  This beer was highly aromatic, very good with a taste to match.  Finally the Flying Dog Double Pale Ale, at 11.5% abv this was a big beer.  This beer was in a class of it’s own, imperial in nature it was a very complex beer.

All in all Mark and I agreed on all the beer this week and the winner was clear.

Up next week, Doppelbock.  If there is a style of beer you think we should put up to the test in our Beer Brawls, drop us an email or leave a comment.