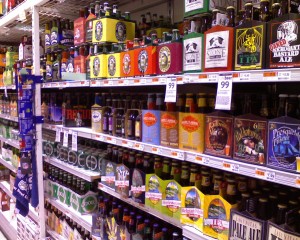 I was walking past the beer, a six pack caught my attention, Lobster Ale… what the F***!  Lobster Ale, I get fruited beer, but lobster??? that was my first impression.  I stopped and looked at the label, sighed a bit of relief that I just have a screw loose for thinking someone would put lobster in beer.  This got me thinking, if the Shoprite is carrying Belfast Brewing Co. Lobster Ale, what else do they have?  I saw Stone, Rogue, Sierra Nevada, Long Trail, Lagunitas, Victory and a couple dozen more quality breweries.  I was also surprised to see cards from RateBeer for some of the beers on the shelf.

It is great to see that craft beer is becoming mainstream, where a local grocery store has these types of beers on their shelf, they wouldn’t carry them if they didn’t sell.