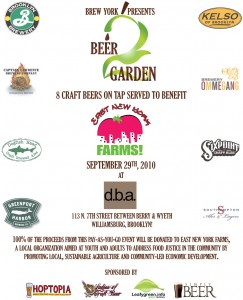 This coming September 29th during New York’s Craft Beer Week, BrewYork – a collaborative of New York-centric beer writers, brewers and advocates – will host Beer 2 Garden, a benefit to raise money and awareness for East New York Farm. The event will take place at d.b.a. in Williamsburg, Brooklyn and will feature rare craft beers from the finest breweries in New York, and the surrounding areas. 100% of the proceeds from this pay-as-you-go event will be donated to East New York Farms, a local organization aimed at youth and adults to address food justice in the community by promoting local, sustainable agriculture and community-led economic development.

d.b.a. Brooklyn has kindly provided BrewYork with 8 tap lines to be filled with donated beer from local New York craft breweries.  All of the proceeds from the sale of these beers will go to East New York Farms.

The mission of the East New York Farms Project is to organize youth and adults to address food justice in our community by promoting local sustainable agriculture and community-led economic development.  East New York Farms currently organizes two community-run farmers markets, a youth internship program, two urban farms (the UCC Youth Farm and Hands and Heart Garden) and works with an ever-growing network of over fifty gardeners representing over a dozen community and backyard gardens throughout East New York. East New York Farms is a project of the United Community Centers in partnership with local residents. For more information, please visit http://www.eastnewyorkfarms.org.

Special thanks to Dani at LimaBean Creative for the flier on such short notice!